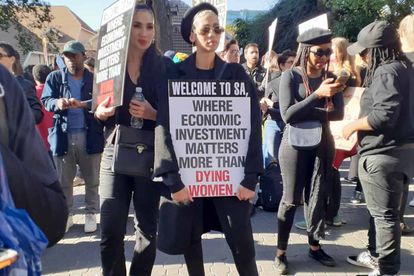 Protestors have taken to the streets as part of #SandtonShutdown and are planning to occupy the streets around the Johannesburg Stock Exchange (JSE) until about 14:00 on Friday afternoon.

Johannesburg Metro Police Department (JMPD) spokesperson Chief Superintendent Wayne Minnaar has warned motorist to avoid the center of Sandton if at all possible on Friday.

“Rivonia Road, Gwen Lane and Maude Street will be affected by this march and the closure of these street will start at 3am up until at least 2pm,” he said.

Maude Street and Gwen Lane are expected to be completely blocked by protestors.

Police are in the area in force for #SandtonShutdown

Law enforcement officials have been deployed to the area to maintain order and ensure the protest remains civil.

I wish the police came out in their numbers like they have in Sandton today when a woman reports a crime #SandtonShutdown pic.twitter.com/T2tjLhR5o9

The purpose behind the protest

The demonstration is to deliver a memorandum to the private sector of the South African economy outlining the problem faced by the country with gender-based and xenophic violence.

The protestors are determined to ensure big business in South Africa are aware they need to be part of the solution too.

“We believe that as a huge player in the country, one that has influence and affects the lives of so many people especially black women, business has been quite disturbingly silent on this issues,” said Lindelwa Nxumalo, from the group Call For Action, according to Eye Witness News.

As promised, #SandtonShutdown started at 3 AM. You can still make your way to the JSE. Bring your placards!
It will NOT be business as usual while we keep dying. #IWILLNOTBENEXT #PayThePatriarchyTax pic.twitter.com/51N4PL1Eil