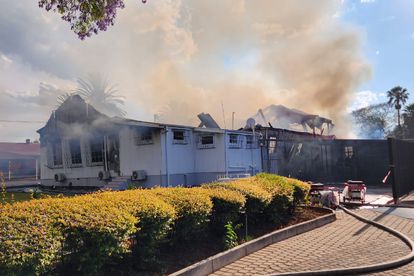 The South African National Defence Force (SANDF) has confirmed that its College Centre in Pretoria was gutted by a fire earlier today, Tuesday, 25 October.

In a statement, the SANDF disclosed: “The South African National Defence Force (SANDF) can confirm that at approximately 11am on Tuesday, 25 October 2022, a fire broke out at the SA Army College Centre for Conflict Simulation building situated in Thaba Tshwane, Pretoria”.

“No injuries or fatalities were reported.”

ARMY TO PROBE THE CAUSE OF THE FIRE

The Army also revealed that the fire was brought under control by the Tshwane Fire Brigade in conjunction with SA Air Force Chief during an already-launched investigation into the cause(s) of the fire including establishing events that led to the fire.

“Further information on the fire incident will be communicated in due course or as it is made available by the relevant authorities,” SANDF cautioned.

In other news, a school in the Free State Province that was battered by a hailstorm last year is up and running and ready to host the final exams.

Following the devastating hailstorm that hit Albert Moroka Marking Center during 2021 marking period for the Grade 12 National Senior Certificate (NSC) examination papers, the school is ready to receive markers for 2022.

Last December matric scripts were damaged, and a marker was slightly injured during the hailstorm that battered the school.
Free State Education MEC Dr Tate Makgoe held a tour around the newly renovated centre and its facilities.