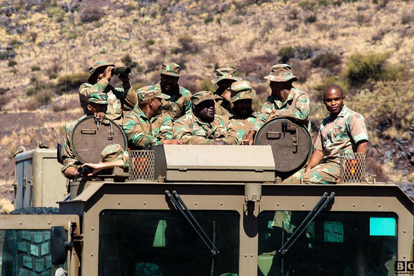 Welcome Sambo is a member of the SANDF was denied bail after he appeared in court for murder. Image by Flickr

Welcome Sambo is a member of the SANDF was denied bail after he appeared in court for murder. Image by Flickr

While carrying out night duty border patrol, South African National Defence Force (SANDF) members came across a Ford Ranger before finding out that it carried R750 000 worth of illicit goods on Sunday 12 September in Limpopo.

The illegal goods, including the car itself, contained illegal cigarettes with a value of nearly half a million rands. SANDF confirmed that the scene of the crime was the Sandquest Vula-Vala Area near Musina.

“The South African National Defence Force confiscated more than three-quarters of a million rand worth of illicit goods. Members of 1 Special Services Battalion, while busy with their night border protection duties at Sandquest Vula-Vala Area, stopped a white Ford Ranger Bakkie,” SANDF said in the statement on LinkedIn.

The report confirmed that the driver of a white Ford Ranger was stopped but suddenly decided to speed away. It was the moment that the soldiers knew that something was certainly fishy about the driver and the vehicle.

The suspect was soon caught by the SANDF before a search revealed that the car had high-value illicit goods. The officers found illicit cigarettes worth R465 614, while the Ford Ranger bakkie was confirmed to be worth R265 000.

“When the driver fled the scene, the soldiers knew that there must be something illegal with the vehicle. The soldiers approached the vehicle and upon searching the vehicle, they discovered R465 614 worth of illicit cigarettes,” SANDF added.

Elsewhere in Limpopo, four suspects met police handcuffs after being found with spiking equipment. The group was arrested for their alleged involvement in a series of spiking robberies on the province’s roads.