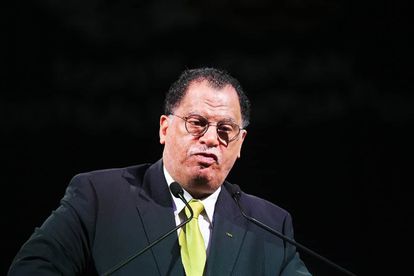 Danny Jordaan was re-elected as the president of the South African Football Association (SAFA) by a margin of 95.12% on Saturday, but the election was not without drama.

Jordaan received 234 of 246 votes, two votes voted against and one spoilt vote.

Earlier in the day, Ncobo walked out of the elective conference claiming that he had been “threatened” during the process at the Sandton Convention Centre.

Saturday’s election has been described as being a “dirty” fight and Ncobo said that the election continued “illegally”.

He was quoted by TimesLive as saying:

“We will have to review that. The decision cannot be mine,” he said.

“I did not nominate myself. There are a whole lot of other people who must make the decision in terms of where to from now.”

“I have registered there, inside congress, formally – it’s minuted – that I said this thing is unprocedural, unlawful and it is organised illegally.”

“As soon as I announced that I want my name removed from this thing there were delegates who started threatening me, especially one gentleman who was close to my table who threw all kinds of insults and threats.

“I don’t know his name. I can’t repeat the things that he said,” Ncobo said.

“But I tabled it again, at the congress, that, ‘I am being threatened here’, and the chairperson of the electoral committee called him to order.”

Ncobo alleged that there were a number of instances of not obeying the statutes and constitution of Safa by the association.

“Even the timeframes. They just called for a condonement of timeframes that have not been met right inside this congress,” Ncobo said.

Jordaan responded angrily towards Ncobo’s allegations saying that it was “nonsense” and said that the process was “transparent”.