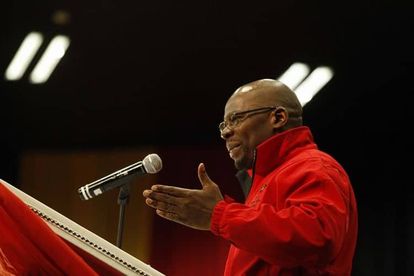 So, instead of a member of the SACP delivering the memorial lecture honouring the party’s former leader, the ANC decided on its own that its new finance minister, Malusi Gigaba, would have the honour.

The memorial, scheduled for Monday evening, comes at a time when the SACP is openly challenging its alliance partner, the ANC and its president after Zuma reshuffled his cabinet against the alliance’s wishes.

“We were never consulted on the name,” Solly Mapaila, the SACP’s second deputy general secretary told News24 on Monday.

Chris Hani was assassinated at his Dawn park home on April 10, 1993, and the communist party – rightly so – expected to have a say in who would be commemorating its fallen leadr.

According to Mapaila the SACP, Hani family and ANC were supposed to consult and decide on someone to deliver the address at Monday night’s memorial, but the ANC went ahead on its own, leaving a bitter taste in the reds’ mouth.

“At the moment we are losing the country,” Mapaila said, adding that the ANC is leaving South Africans in limbo and poverty while politicians fight among themselves.

“He will be sad that we still leave the majority of our people in limbo, in poverty, whilst fighting over petty things – over the accumulation of resources, which should never actually be the case.”

Mapaila told News24 that the march 30 cabinet reshuffle proved that policy decisions are no longer made with tripartite Alliance input.

Watch: “The more the ANC keeps Zuma, the better for all of us here,” Malema at #OppositionMarch briefing

Earlier on Monday, the SACP made it clear that it would not relent in its calls for Zuma to step down and that it would use the Hani memorial to speak out about what’s been happening.

Read: UDM approaches ConCourt in bid to force secret ballot during no confidence vote in parly