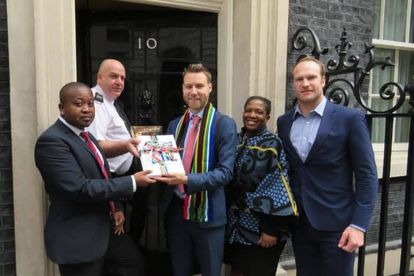 The Royal Commonwealth Society, with its supporting partners, visited 10 Downing Street to submit a public petition on restoring visa-free travel for South Africans visiting the UK. The business and diaspora-backed campaign received positive support with 12,000 signatures from people across the UK and South Africa.

Since 2008, South Africans visiting the UK have been subject to expensive visa requirements which discourage them making the trip. The cost of such a visa has upset many South Africans that need to visit the UK for business, to see family, or even for a holiday.

Comments recorded during the campaign highlight the levels of frustration:

Nick from Johannesburg said: “I own multiple businesses in the U.K. Having to send my staff over for meetings and business training has become a hassle. It is unreasonable that a modern South Africa, that is part of the Commonwealth, has these restrictions.”

Andrew from Port Elizabeth told us: “I need to travel to the UK for business reasons soon, and these visa restrictions make things really difficult.”

Lynette from Potchefstroom explained: “We lived in the UK for two years. I studied there. We have friends in the UK. We would like to visit them more often. Visa regulations, the price, and the effort of traveling to Johannesburg for visa applications makes it difficult to travel to the UK.”

Sean from Oudtshoom remarked: “I am a travel agent and business has dropped since we needed visas.”

The Society’s Director of Policy & Research, Tim Hewish, said: “Today is a symbolic moment for our campaign outside what is regarded as the most famous door in the world. I want to thank each and every person who signed the petition. This year the UK and South Africa will have their latest bilateral meeting. At that event we want both sides to acknowledge the campaign’s strength of support and discuss workable solutions for a return to visa-free travel that is safe and secure.”

Kaizer Chiefs: ALL the transfers that could still happen