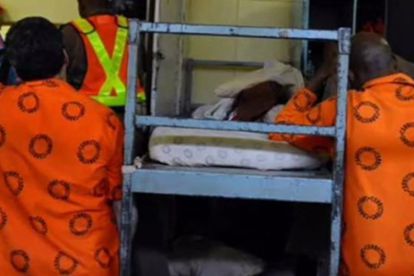 The country’s prisons continue to be overcrowded. By June this year, prisons were overflowing by 33.21%, an increase of 5% prison population recorded in February.

This was revealed by Justice and Correctional Services Minister Ronald Lamola to questions posed by the Democratic Alliance.

While all prisons in the country are overcrowded, Eastern Cape province had the highest level of overcrowding, with 63.03% of overflowing inmates. The province has 20 265 inmates.

But the the highest prisoner population are Komani, Mount Frere and Bizana prisons in the Eastern Cape. This included Allandale in Paarl, Western Cape and Lusikisiki prison in KwaZulu Natal. All the prisons overflowed by 199.21 to 248.24%, said Lamola.

PRISON HAS A RATIO OF ONE OFFICIAL TO FOUR INMATES

The ration of prison officials to inmates was at 1 staff for every four prisoners. This however does not include administrative staff.

A large 16 112 of those out on parole have breached and violated their parole conditions.

“This includes the actual numbers of all revocations such as reoffending, loss of support system, revocation of absconders, and violation of conditions.”

Since March 2019, 6 417 parolees had committed serious offences since their release.