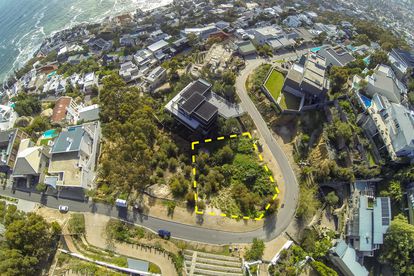 A plot of land has come up for sale in Bantry Bay in Cape Town, neighbouring the most expensive house ever sold in South Africa. Photograph: ClareMart

A plot of land has come up for sale in Bantry Bay in Cape Town, neighbouring the most expensive house ever sold in South Africa. Photograph: ClareMart

Fancy the opportunity to call the most expensive house ever sold in South Africa your neighbour?

Well, it just so happens that a vacant plot of land has come up for sale right next to the most expensive house ever to be sold in the country. Unsurprisingly, the plot has sparked widespread interest among investors, prospectors and property moguls.

In 2016, SA’s most expensive residential property fetched a staggering R290m, and now the vacant erf directly in front of the luxury house, in the highly sought-after, Ocean View Drive in Bantry Bay, is on the market. It will be interesting to see whether the owners of the luxury home are tempted to snap up the neighbouring plot to ensure that any new home built on the land does not encroach on their expansive ocean view.

“We are incredibly excited about this 700 m² vacant land that offers potential buyers the opportunity to cash in on a blank canvass where the options for developing that dream home, are endless,” ClareMart’s Head of Special Projects and Developments, Rob Stefanutto said.

However, the depreciation of the rand, against a backdrop of a massive decline in property prices over the last 12 months, has created an economic climate where foreign investors are driving prices down even further, particularly in the luxury residential market.

“That being said, homes in this market are still selling between R40m and R100m. Here is an opportunity to build and make a great investment in one of the most sought-after roads in the country, for under R35m, taking into account construction costs at a staggering R35 000 per square meter,” Stefanutto said.

South Africa, like many other countries, is still gripped by a recession, but an incredible concentration of wealth remains in local hands, so this opportunity is in no way only within reach of international investors.

“We are seeing the buds of recovery in the market. I am in negotiations with some of South Africa’s largest development companies who are presently acquiring development opportunities from us, that are worth in excess of R150m. They are planning to spawn new developments worth billions of Rands over the next six months, indicative of rising investor confidence. I have seen this pattern in my 22 years of dealing and structuring deals with developers, where there is significant market recovery after each crisis,” Stefanutto said.

“This was the case in 2001, 2008 and 2014, and it is my belief that we will see the same recovery post-COVID, with strong investment vehicles emerging,” he said.

Auctions continue to gain traction as a preferred selling platform, particularly for speedy sales with no commission payable by the seller and non-suspensive cash offers.

The vacant land next door to the most expensive house, will go under the hammer on-site at 278 Ocean View Drive in Bantry Bay at noon on 10 December 2021.