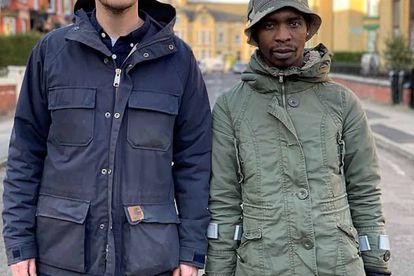 Themba Cabeka (right), who has now adopted a British name, Justin, pictured with Channel 4 producer Rich Bentley who tracked him down to a flat in Liverpool for a documentary: The Man Who Fell From The Sky.

Themba Cabeka (right), who has now adopted a British name, Justin, pictured with Channel 4 producer Rich Bentley who tracked him down to a flat in Liverpool for a documentary: The Man Who Fell From The Sky.

A stowaway who clung to the undercarriage of a jumbo jet and survived an 11-hour, 9000km flight from South Africa to London has spoken for the first time of his terrifying journey, recalling how he emerged from a coma months later to learn his best friend had fallen 5,000ft from the aircraft to his death.

Themba Cabeka, 30, was unconscious in hospital for six months after being discovered on the grounds of Heathrow Airport.

He had been starved of oxygen and subjected to temperatures of -60C as the British Airways jet flew from Johannesburg on June 18, 2015.

Only two people have lived after stowing away to Britain: Pardeep Saini, a car mechanic from Punjab, who endured a ten-hour flight from Delhi to London in 1996, and now Cabeka.

Friend not so lucky

Tragedy struck only minutes before landing when Cabaka’s friend, Carlito Vale – who had crawled with him into the wheel arch of the Boeing 747-400 – fell to his death from BA Flight 54.

His body was found atop an office block in Richmond, some six miles from Heathrow.

Cabeka says when he came out of his coma, a police officer showed him Carlito’s passport and asked: “Do you know him?”

“Of course I know him. That’s my friend, Carlito,” he replied. The officer told him: “He never made it. He fell on top of a building.”

Little was known about Cabeka until Channel 4 producer Rich Bentley tracked him down to a flat in Liverpool for a TV documentary, ‘The Man Who Fell From The Sky,’ to be screened on 4 January.

Cabeka’s story began when he met Vale in a Johannesburg nightclub and they plotted their illegal journey to Britain.

Vale had been a homeless street kid who’d grown up in an orphanage following the civil war in Mozambique. Then estranged from his wife and daughter, now aged 11, he dreamt of a better life abroad.

Cabeka, who never knew his father and was abandoned by his mother when he was three months old, had been living since the age of seven in an informal settlement near OR Tambo International Airport.

He said the violence and gang warfare in the city had left him emotionally scarred.

“My background was very hard. I was raised by my cousin, who adopted me as a child. Everything was normal until she passed away. I was going to school but I had to drop out because I couldn’t pay the fees. When my cousin died, everything started to break down. So I thought, that’s the end for me.”

It was at this point that he met the homeless Vale. “I was sitting at a table inside the club. He came over to me looking for cigarettes and I gave him one. I saw he had nothing so I said to him come sit down and join me and drink these beers.”

The pair shared their experiences after which Cabeka said to Vale: “Look at me. I’m like you. We have to stick together.”

Cabeka invited Vale to live with him at the campsite and the pair grew close. The two then decided that they had to leave South Africa in search of a better life.

Their escape plan was hatched after looking at Vale’s collection of engineering books which included one about aeroplanes.

Cabeka recalls: “I took down all the details so that if we wanted to go on a plane, there’s the way to do it.”

“The airport was guarded so we jumped over the fence when it was dark,” Cabeka said. ‘We dressed in black because we have to dress like no one sees us – two T-shirts, three jackets, and two jeans.’

After getting over the fence, they hid for about 15 minutes until they spotted a plane ready to take off.

Cabeka says they deliberately avoided American airliners because they didn’t want to fly over large expanses of water.

The BA jumbo to London took off at 10.15pm. It was the first time either of them had been on an aeroplane.

“We had to force ourselves to be squeezed inside. I could hear the engine running.”

Cabeka said he tied himself to the plane with an electric cable wrapped around his arm. Aviation experts said it is very rare for stowaways to survive in an unheated, unpressurized part of an aircraft.

There is room, though, in the four sets of a 747’s landing gear, each in a housing the size of a car, as long as they stay in one of the corners away from the wheels when they retract.

Very soon, though, Cabeka passed out through lack of oxygen. He says he still cannot believe he managed to survive temperatures that would have dropped to -60C.

The first thing he recalled was lying on the runway with a shattered leg.

“The thing that made me wake up is the way I dropped out on the runway,” said Cabeka, who still uses crutches because of the injuries sustained when he fell.

“I was here. The plane was there. I was asking myself, How did I get out of the plane?” I could see these guys, they were the guards, they carried me up and I passed out again. I woke up in hospital after being in a coma for six months.”

Doctors believe Cabeka survived because the freezing temperatures kept him in a state of what is termed ‘suspended animation.’

With a lowered core body temperature, the heart, brain, and other critical organs are placed into a ‘standby mode’ in which they do not require nearly as much oxygen, thus limiting damage to cells and organs, doctors explained.

‘I was lucky not to hurt my head,’ he said. ‘I had two burn marks on my arm, but it is OK now because I had surgery. But something is still wrong with my leg. I’m hoping they can sort it out.’

Cabeka applied for asylum to stay in the UK and was granted leave to remain – though he is coy about on what grounds that was granted.

He simply says: ‘When I was applying as an asylum-seeker, I went through the process and was accepted.’

Cabeka, or rather Justin – his newly adopted British name – now lives in a one-bedroom flat in Liverpool and is unable to work due to his injury.

“I’m now waiting to get a passport. It takes five years to get a British passport and then I will be able to fly on a plane. I will be a Scouser then.”