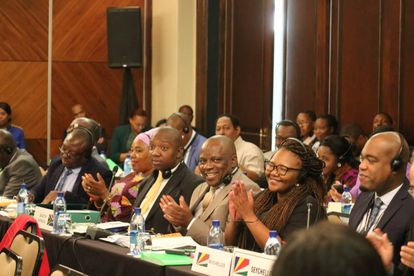 Speaking at the closing of the Women’s Roundtable held on the side line of the 46th Plenary Assembly on Friday, Kate Bilankulu, who is also the vice-chairperson of the regional women’s parliamentary caucus, appealed for “rigorous efforts” to ensure gender parity in the region.

The theme of the session, which started on Wednesday 11 December and ends on Monday 16 December in Swakopmund, Namibia, is “The role of SADC Parliaments in promoting universal health coverage by 2030”.

“Women holding a mere 24% of parliamentary seats is just not good enough. More rigorous efforts and stronger political will are necessary to boost women’s political participation and empowerment,” Bilankulu said.

The Universal Health Coverage aims to ensure that all people receive the health services they need, including health initiatives designed to promote better health and prevent illness, through among others, vaccinations.

Bilankulu urged Members to use the remaining 11 years before 2030, to strengthen efforts to ensure that the commitments made by the region’s governments, to reach meaningful equality at all levels of decision-making in political, economic and public life, succeed.

She said the roundtable discussion was important, as “it is through such multilateral engagements that we can learn from each other and share strategies and approaches to address common challenges we experience in our respective countries.”

She appealed to all delegates to spearhead the gender parity discussion within their respective parliaments and political party structures with renewed and vigorous commitment.

One of the youngest women representatives at the Symposium, Siviwe Gwarube, said the inclusion of youth and women will ensure representation of needs and aspirations of diverse constituencies.

“We need to demand that as we gather in symposiums such as this to ensure diversity, to include young women and young people so that as we consider solutions pertaining to issues Africans face there’s diversity of views around the table,” Gwarube said.