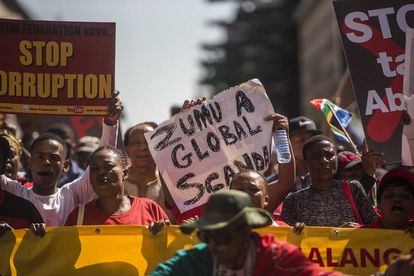 PRETORIA, SOUTH AFRICA – MARCH 31: People gather at Church Square during the #OccupyTreasury protest on March 31, 2017 in Pretoria, South Africa. Marchers gathered outside the National Treasury in Pretoria, calling for President Jacob Zuma to step down, following his announcement early on Friday of a dramatic Cabinet reshuffle.

PRETORIA, SOUTH AFRICA – MARCH 31: People gather at Church Square during the #OccupyTreasury protest on March 31, 2017 in Pretoria, South Africa. Marchers gathered outside the National Treasury in Pretoria, calling for President Jacob Zuma to step down, following his announcement early on Friday of a dramatic Cabinet reshuffle.

In a statement released on April 11, the South African Chamber of Commerce in London — a key player in Mzansi’s corporate image in the United Kingdom and the driver of investment opportunities back home — spoke out strongly against the political turmoil instigated by Jacob Zuma and overseen by the ruling ANC.

The South African Chamber of Commerce UK (SACC) has noted with deep concern the political crisis in South Africa following President Zuma’s actions of the last two weeks.  Recalling Gordhan, who had just arrived in the UK on an investor roadshow. then reshuffling the cabinet, firing Finance Minister Gordhan and his Deputy, two changes within many seen to be an exercise of purging his political opponents.  Gigaba, who replaces Gordhan, is seen a Zuma supporter with limited finance expertise.

The current political crisis has already lead to Standard and Poor’s downgrading of the country to sub-investment (Junk) status, which was followed last week by Fitch downgrading the sovereign status to “junk” and downgrading five of SA’s retail banks.  Moody’s have put SA on watch to review, SA economic growth figures released in January reflects negative growth for the quarter.  Averaging over a year, growth is slow, unemployment is 26.5% and the tax base is dwindling.

The political and ratings repercussions will inevitably accelerate the outflow of foreign capital.

In response to the events of the past two weeks the Rand has fallen 12% and SA Banking stocks have tumbled 9%.

This current and inevitable future loss of capital and flight of foreign funds will deepen the interconnected problems of low economic growth, industrial performance, poverty and unemployment.

John Battersby, renowned SA journalist, ex Brand SA and a Director of SACC noted “The crisis has already had an adverse impact on the economy, which is likely to worsen as events play out; as always and unfortunately, the vulnerable will feel the impact first.”

Firing the locally and internationally respected Finance Minister, Pravin Gordhan, in what amounted to a “midnight reshuffle” within the ANC, has been rejected by a wide coalition consisting of business, civil society, the churches, major trade unions, political parties and including initially leaders of the ruling party. The vocal ANC leaders have apologised for expressing their dissent which is a truly worrying reflection on the situation.

Sharon Constançon, Chairman of SACC and forex specialist observed, “The political and ratings crisis caused the Rand to weaken by 12%.  We can be mildly grateful as the last time the Finance Minister was fired the Rand fell to the same degree but on top of a 30% depreciation over the preceding 12 months. This time, it was on the back of the Rand being the best performing emerging market currency over the last 6 months. We must remain mindful of how vulnerable the currency can be”.

The South African Chamber of Commerce in the UK calls on all parties to restore order, adhere to good governance principles and to act in the best interests of all South Africans.