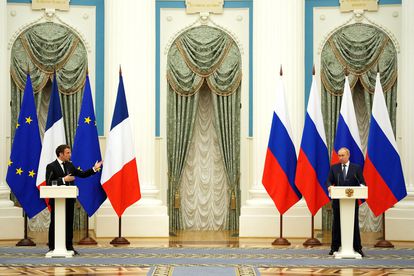 For even as fears have rocketed over a possible full-scale Russian invasion, they have seen a drop in the number of shells and bullets coming their way from Moscow-backed separatists.

The West’s attention is currently focused on the more than 100,000 Russian troops parked on Ukraine’s border, but Kyiv has been locked in a festering conflict with Moscow-backed rebels for almost eight years.

The violence along the eastern front line has ebbed and flowed at a relatively low intensity for a long time and, according to Botsman, recently subsided.

Still, he said, on Monday alone his position came under fire from enemy mortars and rocket-propelled grenades. The odd explosion was also audible when AFP journalists visited.

“Autumn was busy,” said Botsman. “They used to keep us awake at night, ruin our meals, but now it’s quiet.”

But he added: “I’m sure they know we’re here, where we are and how many of us there are.”

Despite the increased tensions not much had changed in practical terms for those stationed amid the snow-covered ruins of Maryinka, on the fringes of the separatist-held city Donetsk, said Botsman.

“Our duties carry on as usual,” he said, except that more mobile observation had been deployed to monitor enemy movements.

But the dire warnings from Ukraine’s Western allies of a possible conflict on a far greater scale – splashed across media worldwide – are fraying nerves.

“The calls coming from home are very disturbing. I have to reassure my relatives.”

Soldiers are doing what they can to cope with the tension.

Sych, 39, has built himself a makeshift gym with barbells and rudimentary equipment in the bombed-out barn where he is stationed.

He believes the warnings of a potential massive attack are part of an information war Russia is conducting against Ukraine.

“We need to end this war – with the help of allies or on our own, just by any available means,” he said. He too identified himself only by his call sign.

But if a full-out invasion does come, he insists the Ukrainian military is better equipped and ready to fight.

“Maybe Putin, like an old fool, thinks that they can reach Kyiv in two days. Just let him try,” he said.

“We stopped him in 2014 when we were wearing just flip flops and had to find our own weapons. Now we are a very strong army.”

Ukraine said Monday it had received more than 1,000 tonnes of weapons and military equipment worth some $1.5 billion in the past few months as Western backers rush in arms.

“The help should come in all forms – moral, and material, military and political,” he said.

He pointed to the failure by the West to stop Moscow’s crushing victory against Georgia in a lightning war in 2008.

“If, as was the case with Georgia, the West is just simply ‘concerned’, then it all ends in tears.”