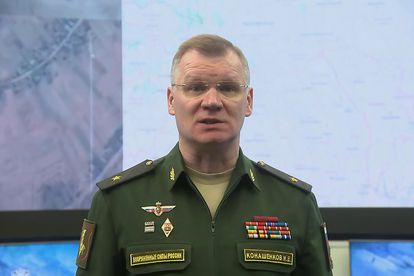 Russia said Friday it would fight to take control over all east and south of Ukraine but Kyiv pledged to save the country, as the UN documented dozens of civilians killed in one town.

Ukraine’s government, emboldened by an influx of Western weaponry, said its beleaguered forces were still holding out inside a sprawling steelworks in the razed port city of Mariupol.

The Kremlin has claimed the “liberation” of Mariupol, which is pivotal to its war plans nearly two months after President Vladimir Putin ordered the shock invasion of Russia’s Western-leaning neighbour.

“Since the start of the second phase of the special operation… one of the tasks of the Russian army is to establish full control over the Donbas and southern Ukraine,”

“This will provide a land corridor to Crimea,” he added, referring to the peninsula Russia annexed from Ukraine in 2014.

Minnekaev’s comments were the clearest articulation yet of Russia’s goals in the invasion’s “second phase”, which was forced on the Kremlin after Ukraine’s Western-backed resistance around the capital Kyiv.

“This only confirms what I have already said multiple times: Russia’s invasion of Ukraine was intended only as a beginning,”

“We will defend ourselves as long as possible… but all the nations who, like us, believe in the victory of life over death must fight with us.”

Seeking a way to end the bloodshed, United Nations chief Antonio Guterres will meet Putin for in Moscow next week, and could also visit Zelensky in Kyiv, the UN announced.

In a phone call to Putin, EU chief Charles Michel appealed for humanitarian access to Mariupol during the Orthodox Christian Easter this weekend.

But Zelensky said Russia had rejected a proposed truce over the holiday, while Putin accused Kyiv of refusing to allow its troops to surrender in Mariupol.

Ukrainian officials who hoped to evacuate more civilians out of the city on Friday called off the operation because of “insecurity” on the roads.

“There have been so many failed attempts at corridors. But we must try as many times as necessary,”

On Thursday, three school buses carrying evacuees arrived in the city of Zaporizhzhia after leaving Mariupol and crossing through Russian-held territory.

“I don’t want to hear any more bombing,” said Tatiana Dorash, 34, who arrived with her six-year-old son Maxim.

She said all they wanted now was a quiet night and “a bed to sleep in”.

Russia’s change of strategic focus to southern and eastern Ukraine saw invading forces leave behind a trail of indiscriminate destruction and civilian bodies around Kyiv, including in the commuter town of Bucha.

A United Nations mission to Bucha documented “the unlawful killing, including by summary execution, of some 50 civilians there”,

the UN’s Office of the High Commissioner for Human Rights (OHCHR) said.

“indiscriminately shelled and bombed populated areas, killing civilians and wrecking hospitals, schools and other civilian infrastructure, actions that may amount to war crimes”.

The UN mission was sent on 9 April, a week after an AFP team found bodies of people dressed in civilian clothing lining the streets of Bucha, after the town had been under Russian occupation for over a month.

Ukrainian officials say the bodies of more than 1000 civilians have been retrieved from areas around Kyiv.

“But what we saw was hands tied behind the back, their legs tied and shot through the limbs and in the back of the head,”

On Thursday, US satellite imagery company Maxar released photos it assessed showed a “mass grave” on the northwestern edge of Mangush, west of Mariupol.

Zelensky also accused Moscow of laying the groundwork for a referendum to cement control of separatist areas in the Donbas region of eastern Ukraine, urging locals to avoid giving personal data to Russian forces.

“This is aimed to falsify the so-called referendum on your land,”

After the latest US pledge of $800 million of equipment, including heavy weapons, French President Emmanuel Macron said he had ordered anti-tank missiles and self-propelled howitzers for Ukraine.

Prime Minister Boris Johnson announced Britain was joining other European countries in reopening its embassy in Kyiv, but he warned that the conflict could drag on until the end of next year.

Russia said Friday one crew member died and 27 were missing after the Moskva missile cruiser sank last week — Moscow’s first admission of the losses in the incident that it blames on a fire.

Ukraine and the United States say the flagship of Russia’s Black Sea Fleet was hit by Ukrainian cruise missiles, and the death toll is uncertain.