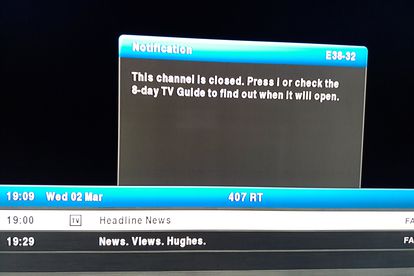 DStv viewers were greeted by this message on Wednesday evening – Photo: Twitter

DStv viewers were greeted by this message on Wednesday evening – Photo: Twitter

The Independent Communications Authority of South Africa (ICASA) has questioned why the Russian news channel Russia Today has been removed from DStv.

Viewers who tuned into DStv channel 407 on Wednesday soon realised that they were not able to watch Russia Today, after they were greeted with an error message informing the public that ‘the channel is closed’.

NO COMMUNICATION FROM DSTV REGARDING RT CHANNEL

In a brief statement MultiChoice explained why the service was suspended.

“MultiChoice confirms that as of Wednesday 2 March 2022, Russia Today shall not be carried on DStv. Sanctions imposed on Russia by the EU has led to the global distributor of the channel ceasing to provide the broadcast feed to all suppliers, including MultiChoice.”

ICASA Chairperson Dr Keabetswe Modimoeng said their Licensing and Compliance Division has not received any notification by Multichoice confirming the discontinuation of the Russia Today channel on its DSTV platform.

Modimoeng said it is in the public interest to know the reasons for this discontinuation since the authorisation was approved by the Authority.

“Given the underlying principle of the South African broadcasting system for promoting plurality of views, it is only prudent for ICASA to enquire with DSTV on the rationale for the discontinuation of the RT channel.”

The Economic Freedom Fighters (EFF) condemned MultiChoice for the removal of the channel amid the ongoing conflict in Russia and Ukraine.

The party said the move undermines both press freedom and the rights of consumers who pay for the DStv service.

“MultiChoice has chosen which news outlets consumers must watched and dictated what content must be watched, based on their allegiance in a complex conflict in Europe. MultiChoice has basically declared that the only reliable international news outlets are those aligned with NATO, such as CNN and the BBC.

“We demand the immediate reinstatement of Russia Today and not this condescending move which seeks to force a one-sided narrative on the conflict between Ukraine and Russia.”