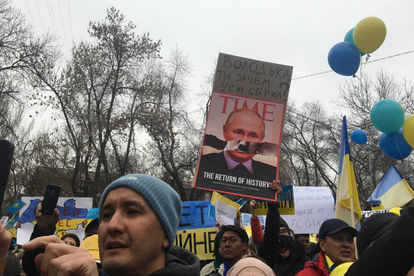 Reports have surfaced that anti-war protests in Russia amid the ongoing conflict with Ukraine has resulted in thousands of arrests. A monitoring group has revealed that 4 366 people have been arrested at protests against the Russian invasion across 56 cities.

Interestingly, the last time that Russia recorded similar high quantities of arrests was last year. At the time, thousands of citizens had demanded the release of opposition leader Alexey Navalny. Navalny had been arrested after returning from Germany following nerve agent poisoning.

Media in Russia opts out of covering protests

Russian media that has been dubbed ‘state-controlled’ carried short reports regarding the protests. However, they failed to feature prominently despite the fact that it was clearly a widespread undertaking.

One such agency had claimed that Manezhnaya Square in Moscow had been ‘liberated’ by authorities following the arrest of participants of an unsanctioned protest against the Ukraine invasion.

Meanwhile, Ukraine President Volodymyr Kelensky has confirmed that another Russian missile strike has taken place on Sunday. In a clip posted to Kelensky’s official social media page, the President confirmed the attack at Vinnytsia. The attack saw 8 missiles directed at a local airport which has reportedly been completely destroyed.