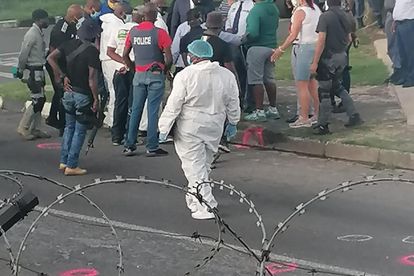 Eight suspects were shot dead during a shootout with police in an alleged Cash-In-Transit robbery in Rosettenville, south of Johannesburg.

Five policemen were wounded and two had to be airlifted on Monday, 21 February. The shootout happened near the South Rand Hospital.

Police Minister Bheki Cele was on the scene in Rosettenville after the shootout. He said the truck was on its way to deliver money and the suspects had planned to bomb it and take the cash.

While briefing the media, Cele said there were about 25 suspects of which 8 are dead and 8 are arrested. However, according to reports, the number has increased to 10.

“Surprisingly without fail, except for one who comes from Botswana, they all come from Zimbabwe and KwaZulu-Natal. They were well armed, they all had mostly AKs about 6 or 7 AK-47s here, with double magazines, which means they are here for business. The surprising one is the one that shot the helicopter and injured the pilot.

“We are working with heartless people that are prepared to kill. I interacted with one of the suspects from KZN and asked him why they are doing this, he said it is because of poverty. I told him there is no such thing if they can afford AKs.”

Cele also added that the AK-47s, R4 and explosives found on the scene will be taken for forensic ballistics to confirm whether or not they belong to the SAPS or SANDF.

Gauteng Provincial Commissioner, Lieutenant General Elias Mawela said they had been monitoring the group of suspects since last week.

He also said that it has been confirmed that the group is made up of hardcore criminals.

“Our highly trained tactical teams dealt with them, this was an intelligent driven operation. We have counted over 8 unlicensed guns. All the vehicles we found in the house (belonging to the suspects) were positively hijacked,” Mawela said.