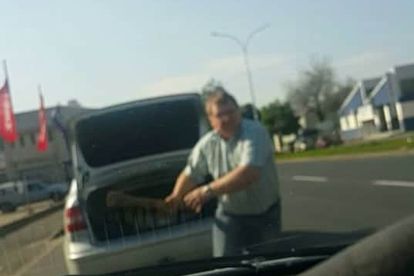 Road rage seems to be having an upsurge again over the last year or so. One would think that but it may just be a case of we see it more because of the accessibility of social media. This latest incident, however, is nothing short of disgusting.

Egan Ezra Vorster explains in a Facebook post that he was assaulted on Monday by a man who “nearly drove into him”. Vorster also claims that when he drove past the man after their near collision, the man called him “hotnot” which is a racial slur for a coloured person. The incident took place in Southern Paarl in the Western Cape.

“He then swerved in front of me a 2nd time, showing aggressive hand-signs and even though my lip-reading is not on CIA-field-agent level, I could make out the words “ek sal jou bliksem”- Anyway, I followed the man down the road where he stopped. Now I know what some of you are thinking, you’re thinking I should have just carried on driving serenely down the beautiful streets of Southern Paarl. Instead, I stopped my car as well, and no- I did not jump out of my car like an idiot. That didn’t stop him though. He jumped out and grabbed a large wooden stick from his car which he used to strike me in the face.”

While there are no signs of racial slurs in the video, the man can clearly be seen brandishing his large stick/plank and threatening Vorster. The men argue for a while before the aggressor shoves the wood through the open window.

You can watch the video from Vorster’s post below.