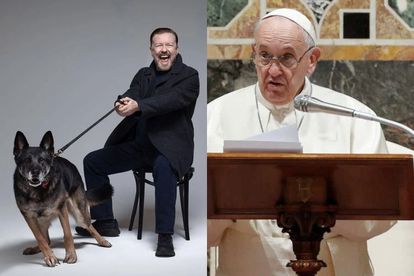 Ricky Gervais has called Pope Francis “stupid” over his comments about people choosing to have pets instead of children.

The head of the Catholic Church recently expressed concern over global birth rates and suggested pets are “taking the place of children” while branding it “a form of selfishness.”

RICKY GERVAIS THINKS WHAT THE POPE BELIVES IN IS ‘RIDICULOUS’

Asked about the comments, Ricky Gervais – who is vocal about his atheism – told The Radio Times Podcast:

“I think what he believes in is ridiculous. It’s a stupid thing to say, isn’t it? How can not having children be selfish? How can it be selfish not to bring something into the world that doesn’t exist on any level?”

“It’s not like there’s a big line or cage of unborn foetuses going: ‘We want to be born.’ It doesn’t make any sense.”

RICKY GERVAIS AND HIS PARTNER ARE HAPPY WITH PETS

The After Life star explained he and his partner Jane Fallon don’t have children of their own for a number of reasons, but he’s happy with his pets.

“I don’t have kids for many reasons but one is that there’s enough. No one’s going, ‘Gervais isn’t having kids, we’re going to run out soon,'” he added.

His comments come after Pope Francis addressed procreation during a weekly general audience at the Vatican.

“Today… we see a form of selfishness. We see that some people do not want to have a child. Sometimes they have one, and that’s it, but they have dogs and cats that take the place of children. This may make people laugh but it is a reality,” he said.

Meanwhile, Gervais, 60, isn’t he doesn’t need to stay clear of controversial topics to avoid the risk of offending people because he feels it is important to push boundaries and confront audiences with new ideas.

“It depends on what the joke is. I can’t stress that enough. I’ll carry on exploring taboo subjects because I like taking the audience to a place they haven’t been before,” he said.