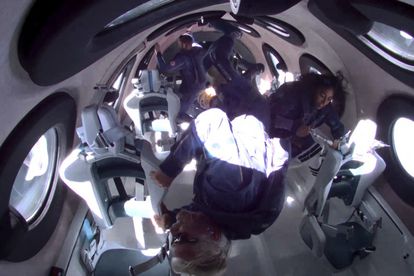 This handout photo courtesy Of Virgin Galactic shows Sir Richard Branson( C) and other Unity 22 crew members at zero gravity, viewed as they flew into space aboard a Virgin Galactic vessel, a voyage he described as the “experience of a lifetime” – and one he hopes will usher in an era of lucrative space tourism at Spaceport America, near Truth and Consequences, New Mexico on July 11, 2021. Photo: Patrick T. FALLON / Virgin Galactic / AFP

This handout photo courtesy Of Virgin Galactic shows Sir Richard Branson( C) and other Unity 22 crew members at zero gravity, viewed as they flew into space aboard a Virgin Galactic vessel, a voyage he described as the “experience of a lifetime” – and one he hopes will usher in an era of lucrative space tourism at Spaceport America, near Truth and Consequences, New Mexico on July 11, 2021. Photo: Patrick T. FALLON / Virgin Galactic / AFP

British billionaire Richard Branson flew into space on Sunday aboard a Virgin Galactic vessel, a voyage he described as the “experience of a lifetime” – and one he hopes will usher in an era of lucrative space tourism.

The mission’s success allowed the swashbuckling septuagenarian to one-up fellow tycoon Jeff Bezos – who owns space company Blue Origin and is set to launch on July 20 – in the race to the final frontier.

“I have dreamt of this moment since I was a kid, but honestly nothing could prepare you for the view of Earth from space,” he said, grinning during a post-flight ceremony where he and crewmates received their astronaut wings, before popping open the champagne to celebrate.

Branson, three fellow passengers, and two pilots (all Virgin employees) breached the US-recognised boundary of space, reaching an altitude of 86 kilometers and experiencing weightlessness for a few minutes aboard the VSS Unity.

The spaceplane then lowered its wings and glided down to the ground at around 9:40 am Mountain Time (1540 GMT), about an hour after it had taken off attached to the belly of a massive carrier plane, which ascended 10 miles (15 kilometers) before dropping its payload.

The rocket-powered Unity achieved a top speed of Mach 3 as it soared to space.

“Congratulations to all our wonderful team at Virgin Galactic for 17 years of hard, hard work to get us this far,” Branson said during an intermittent live feed as Unity descended, calling it the “experience of a lifetime.”

The patchy video transmission was the only blemish on an otherwise drama-free flight, and more inflight footage is expected to be released later on.

Branson scooped up his grandchildren and hugged loved ones after the trip.

Branson, the consummate showman, also unveiled a Willy Wonka-esque competition for space enthusiasts to win two free tickets on Virgin Galactic flights through the website Omaze – and a persona-guided tour of Spaceport America.

“I promise lots of chocolate,” he joked, comparing himself to the beloved Roald Dahl character.

Several tourists journeyed to the International Space Station in the 2000s, but on Russian rockets.

Branson’s official role is to evaluate the private astronaut experience to enhance the journey for future clients.

The 70-year-old founder of Virgin Group, which today has interests in everything from commercial aviation to fitness centers, is known for his appetite for adventure and has set world records in hot air ballooning and boating.

He founded Virgin Galactic in 2004, but the dream almost came to an end in 2014 when an in-flight accident caused the death of a pilot, considerably delaying the program.

Since then, VSS Unity has successfully reached space three times, in 2018, 2019 – which included the first crew member who wasn’t a pilot – and finally in May this year.

Sunday’s flight left from Spaceport America, a huge base built in the Jornada del Muerto desert, around 20 miles southeast of the nearest town, Truth or Consequences.

Financed largely by the state of New Mexico, Virgin Galactic is the principal tenant.

Will Branson introduce paying passengers in 2022?

After Sunday, Virgin Galactic plans two further flights, and then the start of regular commercial operations from early 2022. The ultimate goal is to conduct 400 flights per year.

Branson hopes to expand that through the competition for free tickets, “so lots of people who couldn’t otherwise have afforded to go to space, go to space.”

The competition in the space tourism sector, whose imminent rise has been announced for years, has come to a head this month.

Bezos, the richest person in the world, is due to fly nine days from now on Blue Origin’s New Shepard rocket.

Blue Origin posted an infographic Friday boasting the ways in which the experience it offers is superior.

The principal point: New Shepard climbs up to more than 60 miles in altitude, thus exceeding what is called the Karman line, the frontier of space according to international convention.

Bezos posted a photo of Unity on his Instagram page after Branson’s trip, offering his congratulations.

“Can’t wait to join the club!” he wrote.