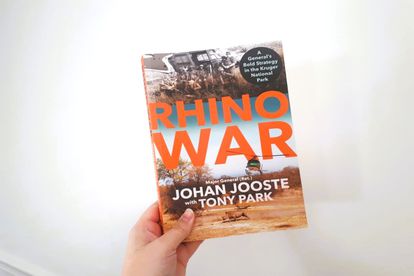 Statistics from the Save the Rhino website states that at least one rhino is killed every day and that while South Africa holds the majority of the world’s rhinos, it has been the country hit hardest by poachers. Rhino War by Johan Jooste and Tony Park truly makes for vital reading about the war raging on poaching.

Rhino War sheds light on the widely publicised war against rhino poaching. Jooste and Park provide valuable insight into the hidden workings of South Africa’s reply to poaching within our borders. With a strong focus on the power of nature and our obligation to protect it, the book is essential in raising awareness of this cruel crime affecting our country’s dwindling rhino population.

This book is not an easy read. It doesn’t leave you feeling warm and cozy. At times, you will feel outraged at the violence and cruelty inflicted on vulnerable rhinos. At other times, you might feel frustrated at the system, just like retired major general Jooste when he was thrown into the deep end of the rhino poaching war.

But even though the book is difficult at times, Rhino War will also have you elated at the victories we have had in the fight against the slaughter of one of our beloved Big 5.

An element which I really enjoyed was that Jooste and Park invited readers to go behind the scenes of the operation. You get an inside look into how the anti-poaching operation began and the development of the system that combats poaching.

The writing is simple but not superficial. So, while the content is heavy, the writing makes it easy and quick to read. Overall, Rhino Wars is a truly informative book about a topic everyone should know more about.

In 2012, Jooste was thrown into the seemingly unwinnable war against rhino poaching in the Kruger National Park. With poaching spiraling out of control, Jooste was told to “go military” to convert Kruger’s ranger corps into a paramilitary force.

Aged 60, white and a veteran with 35 years of military service, Jooste’s controversial appointment was immediately met with resentment and outright hostility. With the media, government, human rights activists and the people of South Africa looking over his shoulder, Jooste had to battle opponents all around to carry out his strategy for turning the tide on rhino poaching.

Rhino War tells how Jooste, facing an unprecedented assault on a national park and a single species, turned a force of demoralized men and women into one of the most effective anti-poaching units in Africa.

Told through his eyes, these stories of the courage and grit of rangers who risked their lives to protect wildlife in the face of a determined enemy are an account of heroism, sacrifice and determination. Humbly and honestly, Jooste tells of the successes and failures of his bold strategy, and shares his vision for the future.

MORE ABOUT THE AUTHORS

In 2012, he was appointed Commanding Officer of Special Projects at SANParks. He went on to establish a Wildlife Crime and Corruption Combatting Coordination Centre. He continues to serve in the fight against poaching as a Programme Manager for Law Enforcement and Security with the Peace Parks Foundation.

Tony Park is the bestselling author of 19 thriller novels set in Africa and several non-fiction titles. He served in the Australian Army, including a tour of duty in Afghanistan. He divides his time between southern Africa and Australia.

Rhino Wars is published by Pan MacMillan and is available for purchase at Exclusive Books stores for R358.