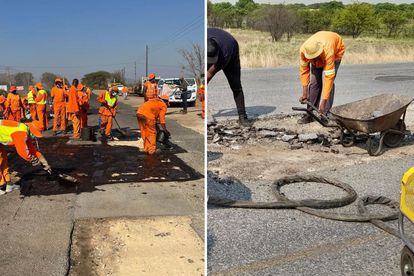 South Africa has more than a whopping 25 million POTHOLES. This is 10 million more potholes than it did five years ago.

THIS WAS RECENTLY REVEALED

He reportedly said that over the past seven years, the number of potholes has increased by about 10 million.

HOW MUCH DOES IT COST TO FIX A POTHOLE?

He furthermore said it costs the government or a municipality between R700 and R1500 per square meter to fix a pothole.

“Strong procurement strategies are needed to address the backlog in fixing the potholes.

“Unfortunately, what we also do because we have not been maintaining our infrastructure very well, we have neglected the infrastructure for too long. The problems have become huge, and that’s why we have the programmes that government is trying to put forward to address the backlog.

“It also needs a strong procurement strategy to solutions that will work so you can be able to track what you have done and if there are any warranty issues on the work that contractors have done, so you can follow them to come and fix again where things have not gone well.

“Which is why we need to comply with the general reporting and accounting to see where our money went.”

‘GOVERNMENT NEEDS TO WORK WITH THE PRIVATE SECTOR’

According to him, the government needs to work with the private sector.

“It is only through partnerships with the private sector that it will happen, because in my instance, I have got the infrared system that we got from the United Kingdom where we repair potholes permanently by stitching the old section to the new section, but when the government needs a solution it needs to be a multi-approached situation, as the government does not have capacity.”

Meanwhile, a three-day conference kicked off on Tuesday, the SA National Roads Agency (Sanral) blamed the lack of maintenance for the pothole problem

SEVERAL INITIATIVES LAUNCHED TO WIN THE FIGHT AGAINST POTHOLES

South Africa has launched several initiatives aimed at winning the fight against potholes, including apps.

Sanral is hailing its latest initiative, Operation Vala Zonke, which was launched in August, as a success.

The initiative has reported significant success in most provinces in just 10 weeks.

HOW MANY POTHOLES HAVE BEEN FIXED IN THE PAST 10 WEEKS

According to Sanral these are the latest figures:

According to Tshwane University of Technology’s Professor Philip Paige-Green said, there was much more to the issue than just filling potholes.

He reportedly said the government already knew what it should be doing to deal with road maintenance issues.

‘IT’S SIMPLE, IF THEY AREN’T FIXED PROPERLY, THEY WON’T LAST’

Paige-Green furthermore said despite a study released by the CSIR [Council for Scientific and Industrial Research] in 2010 that details the approach we should be taking to deal with potholes, little of what was proposed has been implemented on our provincial, urban and district roads.

“It’s simple, if they aren’t fixed properly, they won’t last.”