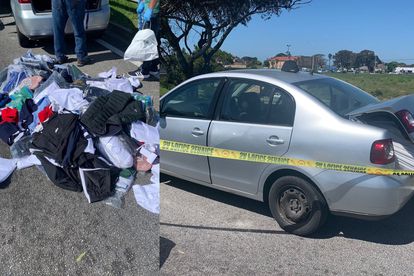 Three suspects were apprehended after their retail store robbery run was short-lived.

Earlier today, Sunday, 2 October, excellent teamwork and synergy between police members in Nelson Mandela Bay resulted in the swift arrest of three alleged business robbery suspects and the recovery of the stolen property.

It is alleged that at approximately 11:09 two suspects entered a clothing retail store at a busy shopping mall in Sherwood pretending to be customers.

“As the complainant went to the back of the store to fetch a pair of takkies for the ‘customer’, he was followed by a suspect who pulled out a firearm.”

It is further reported that four more suspects entered the shop with firearms, and demanded the keys to the shop and safe.

“Three of the employees were taken to the back of the shop while the suspects ransacked the shop. The stolen clothing was shoved into a duvet cover and dragged out of the shop as they fled,” van Rensburg reported.

She added: “An observant and alert police official who was on duty at the mall spotted the fleeing suspects dragging the stuffed duvet and immediately alerted his colleagues at the 10111 Centre. The suspects fled in a silver colour VW Polo and a Silver Kia. The vehicles were circulated and immediately police officers from surrounding stations and units were on the hunt for the vehicles”.

RESIDENTS HELP THE POLICE WITH DIRECTIONS

She went on, “SAPS Kabega Park was first to spot the vehicles but lost them as they sped on the N2 towards New Brighton. Back up vehicles were in close proximity and SAPS Mount Road and Gqeberha K9 were informed that a silver VW Polo was abandoned on the N2 freeway on ramp towards Cotswold”.

van Rensburg further detailed that the residents in the area directed members towards Hammerkop Street in Cotswold extension.

“One suspect jumped the fence into a yard and was arrested. Two more suspects who were hiding in the bushes were flushed and apprehended by our four legged K9 officer, Diesel.

The estimated value of the stolen property is R200 000. The VW Polo was impounded for further investigation,” she concluded.