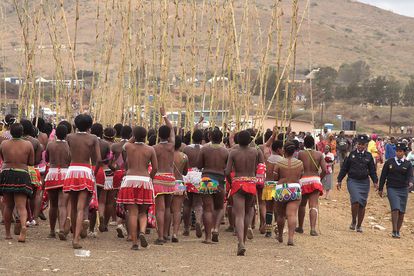 Security at eNyokeni Royal Palace in Nongoma has been beefed up on Saturday, 17 September, after a clash between royal family members on Friday.

The annual Reed Dance, known as ‘Umkhosi WoMhlanga’ in isiZulu, will go ahead at eNyokeni despite members of the faction who support Prince Simkade Zulu’s claim to the throne saying they “were prepared to die to stop it.”

According to SABC News, maidens from across South Africa began arriving at the royal palace on Friday night and are expected to present their reeds to AmaZulu King Misuzulu kaZwelithini on Saturday.

The ceremony was revived by the late King Goodwill Zwelithini in 1984 as a means to address teenage pregnancy, HIV/AIDS and other social problems that face young women. Camps that include lessons on womanhood are held during the ceremony, according to the public broadcaster.

There will be a heightened police presence at the palace to ensure the Reed Dance is not interrupted. On Friday, police members helped to quell an alleged altercation between factions that support Prince Simakade and King Misuzulu.