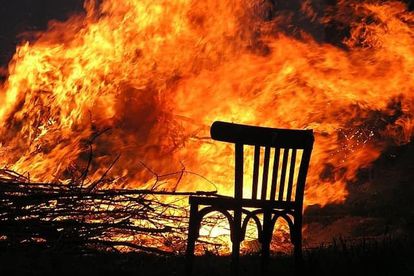 A Pretoria couple has been left dejected after robbers burnt down their thatch house in the early hours of Friday morning. Marina Koppel says she won’t even bother collecting things again.

News24 spoke to the couple and reported on the traumatic event. Koppel and her 62-year-old husband, Alan, say that they will now have to postpone their retirement.

The robbers broke into their house in the Downbern area, north of Pretoria, at about 03:30 on Friday. The robbers then apparently set the house alight. At the time, Marinda was in Zambia for work and Alan was in Polokwane.

To make matters worse, the Koppels were already in the process of selling their house.

“The transfer documents would have been submitted next week. Now the transaction [with the buyer] has been cancelled,” said Marinda.

Marinda’s father and the family housekeeper were at home at the time when the robbers attacked. Joseph Kande, who works on the smallholding, also told News24 that “several” intruders broke open the doors and security gate, threw stones and then set fire to the garage next to the house.

The police were quickly called and by the time they arrived, the police called Bester and the staff out of the house. The house burnt to the ground and two cars were also burned to a cinder. Marinda says the only thing that survived were two coffee cups.

Even the animals couldn’t escape the blaze. Two cats died, one’s body was found in the swimming pool, one survived and the fourth is still missing. Thankfully though, none of the residents were injured.

The spirit of community quickly showed after the ordeal as people began donating clothes, food, furniture and toiletries.

The family are currently living in a flat that wasn’t damaged.