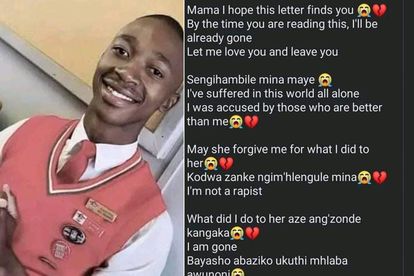 The family of the late Bafana Sithole, a Hoërskool Kriel rape-accused learner, holds the Mpumalanga institution accountable for the death of their son.

WHAT HAPPENED TO THE Hoërskool Kriel LEARNER

The 17-year-old Grade 11 promising learner was accused of rape by a 15-year-old fellow learner. Bafana allegedly underwent humiliation and was demoted by the school which apparently never heard his side of the story – and never will after taking his own life.

Hoërskool Kriel learner committed suicide two weeks ago after the serious allegation took a toll on him. It is reported that he was stripped of his badges of honor and awards without informing his parents or the police about the matter.

It’s reported that he was given keys to the storeroom where he took his own life. A message which he wrote to his mother prior to hanging himself has surfaced on social media. In the heartfelt message, the late Bafana hoped that the message finds her. He said he was leaving this world because he had been accused by those who are better than him.

“Mama I hope this letter finds you. By the time you are reading this, I’ll be gone. I’ve suffered in this world all alone, I was accused by those who are better than me. May she forgive me for what I did to her but I never raped her. My problems are now solved in a long peaceful sleep”.

It has also surfaced that the ‘victim’ lied about the rape after Bafana’s death, dismissing the entire incident as a joke.

SCHOOL RELEASES A STATEMENT AFTER THE TRAGEDY

The school has since released a statement saying, “steps were not yet taken to charge the boy with any misconduct. The principal gave the boy the opportunity to react to the allegations and also made sure that he gets the necessary support, Two teachers with whom the boy had a good relationship would have supported him firstly to get his version of the events in writing”.

The school says he took his life after an initial meeting before any possible decision about action against him could be taken.

Hoërskool Kriel learner was laid to rest this past weekend.

The Mpumalanga Education Department has since sent its sincere condolences to the bereaved family and the school community.