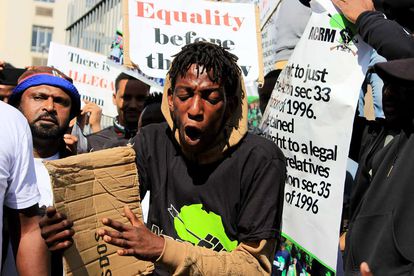 South Africa – Johannesburg – 12 August 2019 – Foreign nationals went to the Johannesburg Magistrate court to picket on behalf of their relatives who were detained by police to process their documents at the Johannesburg central police station during the Joburg raids.
Picture: Dimpho Maja / African News Agency(ANA)

South Africa – Johannesburg – 12 August 2019 – Foreign nationals went to the Johannesburg Magistrate court to picket on behalf of their relatives who were detained by police to process their documents at the Johannesburg central police station during the Joburg raids.
Picture: Dimpho Maja / African News Agency(ANA)

Gauteng member of the executive council (MEC) for economic development and agriculture Kgosientsho Ramokgopa made a trip to Soweto following the looting of business owned by Foreign nationals on Wednesday night.

Ramokgopa blamed the violence on anger over a weak economy and unemployment.

He felt that that it was also a response to clashes earlier this month between foreign street vendors and police who confiscated their counterfeit products in Johannesburg’s central business district.

“It is alleged that the locals are looting foreign-owned shops and attacking shop owners as a form of retaliation to the… the operation that went wrong in the Johannesburg central business district over two weeks ago,” he said.

“Whereas it is easy to characterize the situation as xenophobia and self-hate, we think that central to the problem is a shrinking economy that is squeezing people out of jobs and business. Undoubtedly, this is breeding ground for conflict.”

Ramokgopa said his visit to Soweto was aimed at finding both political and practical solutions to the situation. Although the time for talk may be long past.

Residents in the Soweto areas of Jabulani, Naledi, Zola, Emndeni, Moletsane, White City, Zondi and Rockville attacked and stole groceries from the shops on Wednesday night.

Photographs and video clips circulating on social media showed looters grabbing food items before dashing off, with some loading the stolen goods into vehicles.

The raids in the Joburg CBD were in the news for all sort of reasons, including traders pelting police with stones, officers being arrested for colluding with counterfeiters, the deportation of around 360 foreign nationals, and the crazy things found by the South African Police Force – including R20 000 worth of diesel and a lot of guns.

During the clashes in the city centre two weeks ago, mainly foreign street vendors pelted police with rocks and chased them out of the area causing officers to leave the area to avoid bloodshed.

They also discovered high calibre firearms during the raid.

There were no reports of injuries and no arrests have been made.