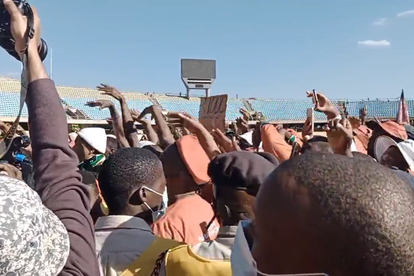 President Cyril Ramaphosa was whisked away after workers stormed the stage during his address.
Photo: Screenshot

President Cyril Ramaphosa was whisked away after workers stormed the stage during his address.
Photo: Screenshot

President Cyril Ramaphosa had to be whisked away to safety after workers demanded he leaves at a COSATU Workers’ Day rally at the Royal Bafokeng Stadium in Rustenburg, North West.

The workers disrupted Ramaphosa while he was trying to deliver his address. The workers are believed to be Sibanye Stillwater Mine employees who want a R1000 increment.

President Cyril Ramaphosa tried to calm the crowd but they did not want to hear anything he had to say.

Despite his promise to deal with their plea for a R1000 increase, the workers continued to protest. They took to the stage to protest.

Police had to intervene and take charge of the situation.

Some South Africans have applauded the protesting employees for their actions, citing the plight of the working class in the country.

“The chickens are coming home to roost, workers are always crying but no one cares, it’s promises after promises. This government need to take stock of their doings otherwise they are losing control of the masses at an alarming rat,” @DonnyM tweeted.

Workers said they are tired of empty promises.

“We don’t want Ramaphosa to address us, he has empty promises, we want our money from 2018 up to now. They said we will be stuck with Ramaphosa for another 5 years, so we want him to step down,” one of the workers said.

Another worker shared the same sentiments and said if they celebrate Workers’ Day, they would be pretending to be happy.

“We are not happy, we want our struggles to be heard. We are going to embark on this particular journey until Ramaphosa hears us,” he said.

WHAT IS THE SIGNIFICANCE OF MAY DAY IN SOUTH AFRICA?

Workers’ Day has been officially recognised and observed since the first democratic elections in 1994.

The holiday serves both as a celebration of workers’ rights and as a reminder of the critical role that trade unions, the Communist Party and other labour organisations played in the fight against Apartheid.

The public holiday in South Africa holds its own cultural significance. It has come to signify not only the sacrifices made on the long road toward fair employment standards but also the bitter battle against Apartheid in which trade and labour unions played a key role.

South Africa’s working classes were those most oppressed by Apartheid, thus the struggle for better working conditions and the struggle to overthrow systemic segregation became closely linked.

ALSO READ: Lily Mine former workers: ‘We have no reason to celebrate Workers’ Day