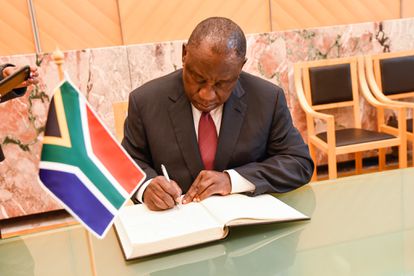 Ahh, a good, old-fashioned ‘family meeting’, is it? The Presidency has confirmed that Cyril Ramaphosa will address the nation on Sunday evening. The event will be broadcast live on TV, and will also be streamed online. But what time will we get underway?

What time is President Cyril Ramaphosa going to address the nation on Sunday 23 October?

Well, that’s a question that was answered earlier The Presidency issued a statement late on Saturday night, confirming only that there would be an address late on Sunday. We received confirmation of the start time earlier this afternoon.

During the COVID-19 pandemic, Cyril Ramaphosa led a series of national addresses which essentially became part of lockdown folklore. The anticipation of a ‘family meeting’ is still fresh in our memories – but what does he want to talk to us about tonight?

What is tonight’s family meeting all about?

Ramaphosa will be revealing what course of action he will be taking against those implicated in the State Capture Report. Recommendations from the Zondo Commission, which held some big-name politicians – and one former president – to account, will now be implemented…

“In line with the remedial action contained in the Public Protector’s report and as required by the ruling of the Gauteng High Court on 23 February 2022, President Ramaphosa has outlined his intentions with regards to the implementation of the commission’s recommendations.”

“The President’s response outlines the steps government is taking to implement the commission’s recommendations with respect to actions against the perpetrators of state capture and reforms to prevent future occurrence of state capture, as well as broader systemic reforms

“Mr. Ramaphosa will shortly be making the response publicly available. Details for public access to the document will be announced in due course. On Sunday evening 23 October 2022, the President will address the nation to provide more details.” | Presidency Statement