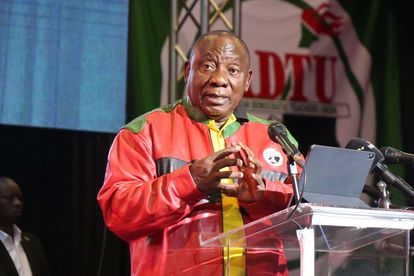 The South African Democratic Teachers Union (SADTU) holds its ninth National Congress in Johannesburg, from Wednesday until Saturday; and President Cyril Ramaphosa states in his keynote address that sexual relations between educators and learners need to stop immediately.

Ramaphosa: “You are not supposed to be lovers of these children”

Ramaphosa further details that these kind of relations are not legal or warranted, especially since South Africa has a looming dark cloud which stems from gender-based violence; he states that there are too many reports of sexual relations between educators and learners.

“Your jobs are to be parents of children who come to your schools. You are not supposed to be lovers of these children.”

Ramaphosa also calls on law enforcement to play a role when it comes to issues of sexual assault, and further states that there might be denials of these incidents but “we all know its happening” and Ramaphosa tasks SADTU to be at the forefront of ending this.

The President also delved into the issue of violence in schools, he states that teachers need to assess if a child is under stress or abused in some way and not remain silent with behavioural patterns they might notice.

The National Congress also heard Ramaphosa voice his concern with the current drop out rate, as SADTU has estimated it to be at 40%, but the presidency has calculated an estimate of 45% based on the number of children who enrol into schools and those who end up writing and finishing matric exams.

“There are too many teachers overburdened and under-resourced, they themselves say this is a duty on government to make conditions better for teachers and to make schools safer with proper fencing and functioning relationships with officers.”

Ramaphosa also mentions that teachers need to effectively spread out; so that they aren’t over-concentrated in affluent areas while neglecting the rural areas with learners who need more attention, he also calls on more young people to join the teaching profession.

“Our responsibility is to build South Africans, to make sure they get jobs, get quality services and as we do this, we must live side by side with other people. It cannot be that South Africans are the ones attacking other people living in our country”

For social cohesion to be built, Ramaphosa declares that better relations with other countries need to be harnessed and the same applies to those living in South Africa, as they will need to obey the laws.

The country’s economy needs teachers and the president mentions that educators are key economic players and they need to ensure that learners are stimulated to actively become participants in the South African economy.

“Comrades, our world is changing. The 4th Industrial Revolution is changing every aspect of our lives, South African children must be prepared for these technological advances.”