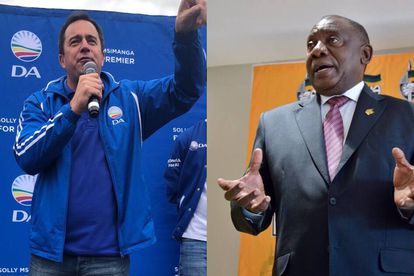 South Africa’s spectacular economic collapse – the third worst in the world for the second quarter of 2020 – is due to President Cyril Ramaphosa’s lockdown, and not to the virus as “he would have you believe,” says DA leader John Steenhuisen.

In a scathing tirade, the interim DA leader said Ramaphosa’s administration could in time be viewed as being “as damaging” as that of former president Jacob Zuma’s, as the lockdown destroyed not only present incomes but also the means to generate future revenue streams.

“Yet he chose to restrict over half of all economic activity for no real benefit,” and create conditions for “ANC cronies to inflate tenders and loot the state,” he said.

“Ramaphosa wants people to believe that it was the virus, not his lockdown, that collapsed our economy. This is a false narrative and it must be debunked at every opportunity.”

‘Ramaphosa got it wrong’

He said the president’s ‘claim’ that the lockdown, not the virus, damaged the economy is completely false.

“In fact, the lockdown did little to curb the pandemic, with the virus spreading out of control during level 4 and South Africa posting the fifth highest number of cases in the world during level 3. Globally, there is no clear inverse relationship between lives lost to Covid-19 and the severity of lockdown.”

Steenhuisen further argued that the general pattern showed that “the stronger lockdown, the greater the economic fallout,” and that this alone shows that it is not the virus, but the lockdown that damaged economies.

“South Africa’s was next-level damaging, with nationwide irrational bans on online commerce, cooked food, alcohol, tobacco, open-toed shoes and the like, most of which restrictions had no bearing on the virus’ rate of transmission.”

On the contrary, he went on, the lockdown will be shown to have cost “multiples more lives than it saved,” not only due to missed vaccines and postponed treatment for other diseases, but due to the undeniable fact that poverty kills.

Nor did government use the lockdown to prepare hospitals, other than in DA-run Western Cape, said Steenhuisen.

“Elsewhere, not a single functional field hospital bed had been delivered months into lockdown.”

Ramaphosa era no different than the Zuma years?

In the fullness of time, Steenhuisen continued, “Ramaphosa’s presidency may prove to have been every bit as damaging as was Zuma’s.”

“His lockdown has set South Africa’s progress back by at least a decade. History will not absolve him, as he claims.”

The DA leader said South Africa’s lockdown was one of the world’s “longest, hardest, most irrational, most costly, and most unsuccessful,” costing not only 3 million jobs, destroying thousands of businesses, and billions in foregone tax revenue, but lives too.

Unforgivably, he added, Ramaphosa ignored the advice of his own scientific advisory council, as well as calls by many groups in society including the Democratic Alliance, to end the hard lockdown and instead opted to prolong it for purely political reasons.

Ramaphosa could have implemented a “smart lockdown” restricting activity only when and where necessary, said the DA leader.

“But he opted for the blunt instrument of hard lockdown. He could have trusted and empowered people to weigh up their own risks and act accordingly within a reasonable set of safety rules. He opted for highly centralized, top-down state control.”

This is the same approach he is taking to South Africa’s economic recovery efforts, which is why there is “reason to doubt that the economy will recover to anything better than it was prior to lockdown,” when it had already contracted for three consecutive quarters.

“He can issue all the platitudes and plans he likes now,” said Steenhuisen, adding if the president is serious about economic recovery, he needs to end the lockdown now and implement wide-ranging pro-growth reforms, and quickly, so that new jobs and livelihoods can be created.

The DA leader said Ramaphosa promised energy reform in his state of the nation address yet bid window 5 is still not open to allow new producers, even as our “kneecapped economy” is subjected to stage 4 loadshedding.

There is similar lack of urgency regarding the auction of spectrum to bring down data costs, Steenhuisen said, while the “investment-killing NHI is back on the table,” even though the pandemic laid bare the “dire weaknesses in our state’s ability to deliver healthcare.”

There is absolutely no talk of relaxing labour legislation for small businesses, even though this is crucial for large-scale job creation.

“There will never be a bigger wake-up call than this 51% fall in GDP. It’s now or never for Ramaphosa,” said Steenhuisen.