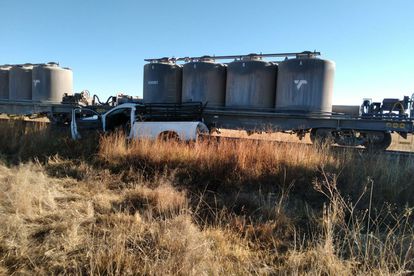 Police said they are investigating a case of culpable homicide after a train and a bakkie collided at a level crossing in the Thaba ‘Nchu district of the Free State on Thursday morning, 13 May. Two people were killed in the accident.

A collision between a goods train and a bakkie took place at 6:38 on Thursday morning near Alpha farm in the Thaba ‘Nchu district.

Police said the driver of the locomotive said he spotted a stationary white bakkie at the level crossing and attempted to warn the driver. Unfortunately, the bakkie did not budge and the collision happened.

Two farm workers, who were allegedly patrolling the farm on Wednesday night, were declared dead at the scene.

According to Arrive Alive, there are more than 7500 level crossings in the country and they represent a significant safety hazard to both road and rail users. “In many countries level crossings on less important roads and railway line are often ‘open’ or ‘uncontrolled’, sometimes with warning lights or bells to warn of approaching trains. In South Africa, there are farm crossings, National-, Provincial-, Municipal- Road and private road crossings.”

In 2019, also in the Free State, a then-23-year-old man survived after his bakkie was hit by a train at the level crossing and dragged for about 10 metres.

When paramedics arrived at the scene, they found the man trapped in the vehicle. “The train had collided with the driver’s side of the vehicle and he needed to be extracted by the fire department before being fully assessed. He was treated on the scene by our advanced life support medic and transported to a private hospital in the area,” said ER24 spokesperson Ross Campbell.

It was unclear whether the man was unaware that the train was headed his way or if he attempted to dart across the crossing instead of waiting.