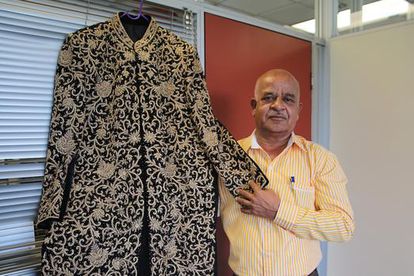 Janak Parekh is the designer of the suave suit that IFP leader, Mangosuthu Buthelezi, received as a gift for his 90th birthday.

However, the Daily News revealed that Buthelezi has returned the suit that came with a price tag of R90 000.

Parekh, although he had to accept that, he revealed that he was heartbroken by the IFP leader’s gesture.

“Human error has caused irreparable damage. I tried hard not to disclose the price,” Parekh said.

Speaking with the Daily News, Parekh identified the fact that he let slip the price of the suit as the reason why Buthelezi may have returned the suit.

“I apologise for any inconvenience caused. It was unintentional. I think Dr Buthelezi returned it because of the price tag. I shouldn’t have let slip how much it cost, but the price tag was misinterpreted,” he exclaimed.

What the R90K suit Mangosuthu Buthelezi returned was made of

IOL News reported that the designer was looking for safe ways to return the 4.5kg suit to India, where it was made.

It took two months to put it together, and the price tag is justified by the distinctive embroidery with gold threads.

“I will give it to someone trustworthy to take back. The suit will not be sold. It was meant for him and it should not be sold or given to someone else. What we do with it will be left to the elders in the family,” he said.

Another option the designer explored was handing the suit over to a museum if Buthelezi had one. A strange suggestion considering the fact that the IFP leader did not dorn the piece, let alone accept it as his.

Narend Singh, the Chief Whip of the IFP, refused to comment on the matter, stating that it is solely between the two parties involved and that the party would not delve into personal issues.