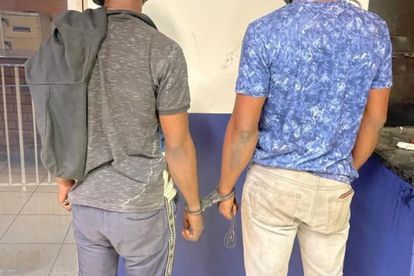 Two Cameroonian nationals were arrested and charged for being in possession of the stolen copper stash. Photo: JMPD / Facebook

Two Cameroonian nationals were arrested and charged for being in possession of the stolen copper stash. Photo: JMPD / Facebook

The Johannesburg Metropolitan Police Department (JMPD) spokesperson Xolani Fihla revealed that two Cameroonian nationals were arrested over the weekend. The duo were caught in possession of an estimated R3 million worth of stolen copper from Transnet and Prasa.

Police officers reportedly used information received to take them to a property on the corner of 11th Road and 3rd Avenue. They observed the suspected property for some time.  An unidentified male opened the gate of the property before officers approached him.

The cops identified themselves to the individual and entered the premises where they started to search.

Another male was inside the property with large amounts of stolen copper that had been cut into pieces. Officers questioned the individuals who were unable to provide justifiable reasons for the excessive amount of copper in their possession. They were subsequently arrested.

The accused attempted to bribe the officers after their arrest

Fihla explained in a statement that the two men tried to offer the arresting officer cash in order to set them free.

“Upon arrest, the suspects attempted to bribe officers with R10 000 cash,” he said.

Officials from SOE Passenger Rail Agency of South Africa Prasa and the City of Johannesburg’s power utility City Power were called. They managed to identify the stolen copper and revealed that it belonged to both Transnet and Prasa.

The estimated cost of the metal was around R3 million due to the reported damage to infrastructure.

“City Power and Prasa officials where called to identify the copper. It was discovered that the the copper belongs to Transnet and Prasa, and it cost an estimated value of R3 million worth of damage to infrastructure.”

Bramley SAPS detained the Cameronian nationals and charged them for both possession of stolen copper and bribery. IOL reports that the men are expected to appear in court on Monday, 7 March, 2022.