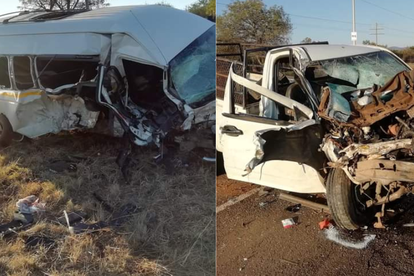 A mini bus taxi and a bakkie collided in Limpopo on Monday morning. Images via Twitter/@PolokwaneWeekly

A mini bus taxi and a bakkie collided in Limpopo on Monday morning. Images via Twitter/@PolokwaneWeekly

A Toyota mini bus was involved in a collision with an Isuzu bakkie on the R25 road between Bloempoort and Groblersdal in Rooikloof in the Elias Motsoaledi Local Municipality, Ga Sekhukhune in Limpopo on Monday morning.

The number of fatalities has not been confirmed.

The R25 is famous for accidents that claim people’s lives and judging from the pictures from the scene, it really was a gruesome accident.

This is a developing story and The South African will provide an update as soon as information becomes available.

In a separate incident, a woman was killed while three men were injured in a head-on-collision on the N1 northbound near the Mall of the North in Bendor Park, Polokwane, Limpopo.

ER24 paramedics and another service responded to the scene around 18h00.

According to ER24, on scene, medics found one light motor vehicle in the middle of the road while the other car was on the side of the road.

A woman was found lying trapped inside one vehicle while three men were walking around on the scene.

“Medics assessed the patient and found that the woman had already succumbed to her numerous injuries. Nothing could be done for her, and she was declared dead.

“The three other men were assessed and found to have sustained minor injuries. The men were treated and later transported by another service to a nearby hospital.”

YOU CAN ALSO READ: Murdered man found clutching to drugs in KZN