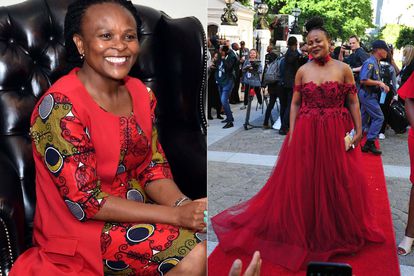 The legal team of Public Protector Busiswe Mkhwebane has chosen not to cross-examine security manager Baldwin Neshunzhi stating that his testimony was irrelevant. Photo: GCIS / Flickr

The legal team of Public Protector Busiswe Mkhwebane has chosen not to cross-examine security manager Baldwin Neshunzhi stating that his testimony was irrelevant. Photo: GCIS / Flickr

This resulted in a slight delay to the proceedings on the morning of Thursday, 4 August. Neshunzhi is a former security manager in the office and Advocate Dali Mpofu questioned whether or not his testimony was relevant.

Mpofu even labelled the security manager another ‘disgruntled employee’. EWN reports that Neshunzhi is expected to provide evidence regarding a recommendation made by Mkhwebane that the Reserve Bank mandate be amended.

However, Mpofu stated that an affidavit given by Neshunzhi was irrelevant in terms of the core complaints against the Public Protector.

“This thing has now turned into a complaint’s office. What would be the relevance of hearing from someone who says ‘well, I was transferred from one department to another’. So what?”

Inquiry chairperson and evidence leader agree that Neshunzhi should testify

Chairperson of the Inquiry Richard Dyanti has since allowed Neshunzhi to be sworn in, explaining that the committee would not stop anyone from submitting information to them. Evidence leader Nazreen Bawa noted that Neshunzhi’s evidence had relevance pertaining to the CIEX matter.

Bawa explained that the security manager had his computer removed and whether or not his documentation was returned intact is relevant to corroborating what “Mr Mpofu calls the disgruntled witnesses”.

This decision is made in the best interests of the institution and the public it serves, said spokesperson Oupa Segalwe. The PPSA will cut funding for Mkhwebane’s appeal against the recent decision of the Western Cape High Court.

Mkhwebane seeks to obtain an urgent interdict to prevent her suspension. This includes the rescission application pending before the Constitutional Court, as well as the application in the Western Cape High Court. Read the full story here.