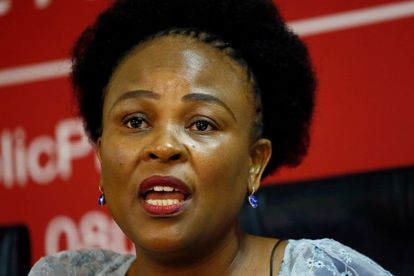 The Western Cape High Court has, on Friday 9 October 2020, dismissed public protector Busisiwe Mkhwebane’s application to have the Parliamentary process for her removal from office suspended.

The public protector had approached the courts in February after the Democratic Alliance (DA), in Parliament, launched another motion to have her removed. Chief Whip Natasha Mazzone claimed she was not fit for office due to being guilty of “misconduct” and “incompetence” on several charges including the SARB and Estina Dairy Farm probes.

Advocate Dali Mpofu, who’s representing the public protector, said the court should not allow the process to remove her. “We have not had an impeachment process that has taken place in our young democracy,” he said.

Mkhwebane, with the assistance of her legal team, will study the judgement to map a way forward. In a statement from the public protector on Friday, it was said that early indications are that the judgement goes against everything the Constitutional Court said in the recent case of Minister Pravin Gordhan vs the Public Protector, which bears a similarity to the matter at hand.

“In that case, which was handed down in May 2020, the Minister sought an interim interdict to have the implementation of the Public Protector’s remedial action stayed pending the review of the findings. The apex court held that there was no foreseeable irreparable harm that the Public Protector would suffer if the interim interdict was granted as it would not thwart her constitutional mandate or offend any of her constitutional powers and functions,” the statement read.

“Delivering the ruling, Acting Deputy Chief Justice Sisi Khampepe said at the time that the minister, on the other hand, would suffer discernible irreparable harm and prejudice should the interim interdict not be granted. She added that there was a reasonable apprehension of irreparable harm on the part of the minister and that it lay in the fact that he would be disciplined if the remedial action was not suspended,” it added.

The public protector said counsel argued in a similar fashion before the high court, indicating that she had a reasonable apprehension of irreparable harm in that she would be prejudiced if the National Assembly carried on with the removal process while a review of the impugned rules, which the Assembly is relying on, was pending.

“The face value implication of the Western Cape High Court judgement is that it is undesirable for the public protector to proceed with the implementation of binding remedial action against a respondent who is challenging its legality but it is desirable for the Speaker of the National Assembly to implement impeachment rules whose constitutionality is yet to be determined by a court of law,” it added.

The DA, shortly after the announcement, said it welcomes the decision by the Western Cape Division of the High Court dismissing the public protector’s application to interdict Parliament’s inquiry into her fitness to hold office.

“Now there should be no delays for the Speaker of the National Assembly, Thandi Modise, to appoint an independent panel – which will determine whether there is a prima facie case for Parliament to proceed with the removal proceedings,” said Mazzone.

“Mkhwebane’s tenure as public protector dirties the once proud reputation of this vital Chapter 9 institution of holding the Executive to account without fear or favour. Under her guidance, the institution has suffered blow after blow in South African courts and leaves a clear impression of toothlessness and ineptitude,” she added.

Mazzone said the interdict was clearly an attempt by Mkhwebane to delay and frustrate the inquiry and to invalidate a legitimate parliamentary process to remove her.