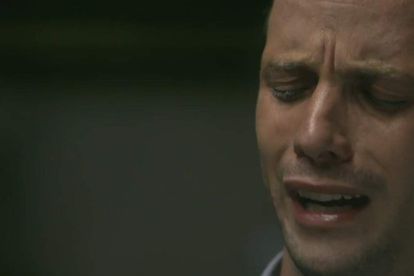 Oscar Pistorius gave his first ever TV interview recently and it aired on Friday night. But many people were unconvinced. Twitter was not having his tears and neither was a psychologist Leonard Carr, who took part in a post-show panel discussion which was aired on Carte Blanche on Friday night.

Oscar Pistorius has given his first TV interview since killing his girlfriend Reeva Steenkamp … Your thoughts?https://t.co/57CFsHIGRM

“This broadcast will have nothing to do with the wheels of justice that are still turning … it will not be taken into account,” he said.

Carr also used words like “rehearsed” and “contrived” to describe Oscar’s “performance” and said that it looked like he was “narrating a movie”.

“To me the interview sounded like a staged restatement of his evidence and what he’d like people to believe.”

“Remember that after three years he’s told this version to many people like lawyers, psychologists and psychiatrists, so there’s a certain amount of coaching and rehearsal.”

“Anyone who’s been through trauma would know that your memory is very patchy afterwards. Oscar tells such a smooth story. I think a lot of it is because it’s been rehearsed.”

In the interview, Pistorius said that Reeve Steenkamp would “not want him to waste his life in jail” – something which rang more alarm bells for carr.

“I haven’t seen evidence of remorse that would focus on paying the price, having genuine regard for the feelings of the Steenkamps, and understanding that in killing Reeva he destroyed someone’s potential who was possibly going to have children and grandchildren and all kinds of good was going to come from her.”