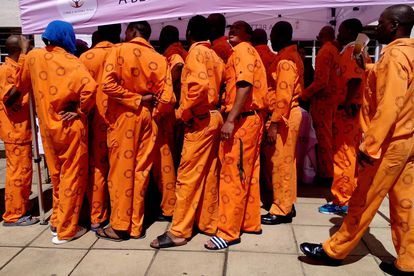 Two videos that were shared widely around social media showing inmates at Durban’s Westville prison, that appear to show the prisoners doing things they definitely shouldn’t be, have led to the suspension of senior manager Dunraj Mohan.

The department of correctional services embarked on a lengthy investigation following a number of incidents that not only showed the department in a bad light, but also called its operational integrity as a whole into question.

The incidents involved two videos of inmates that emerged from the Westville Prison apparently having more fun than they should behind bars, ill-discipline of inmates at the St Albans Correctional facility, and the death of a prison guard at the Goedemoed Correctional Facility.

The crux of the matter and the department of correctional service’s statement to the media centers around the videos from Westville though. Presumably, because they got the most attention.

In the first video, officials of the prison can be seen antagonising inmates and encouraging them to fight each other. They allegedly even gave the prisoners some of their equipment.

In the second, inmates can be seen snorting a white substance that strongly resembled recreational narcotics. The substance was even cut into neat little lines.

Investigation into the videos

The officials allegedly involved in the videos were suspended in August 2018, but were reinstated by the end of October that year. Although they were moved so they would not have direct contact with the implicated inmates.

“From the evidence gathered, it has been found that the investigation was conducted and submitted to the delegated authority for approval and sadly, nothing was done beyond that,” read the statement from Minister Ronald Lamola.

Further action has now been taken though. The three inmates involved in the second video have been moved to South Africa’s only Ultramax correctional facility called eBongweni in Kokstad, while Mohan has been suspended.

“Both of these investigations have revealed that there was a complete dereliction of duty and or maladministration at the Durban Management Area,” Lamola said.

“As a result, the National Commissioner has recommended that the senior manager responsible for Corporate Affairs, Mr. Mohan be placed under suspension. Mr. DJ Makhaye has been appointed as the acting Area Commissioner and is expected to bring about stability and must ensure that operations run optimally.”

“This facility has been placed under Ministerial scrutiny following several incidents which have not been suitably dealt with. The behavior of inmates at this particular center is worrying and this is clearly illustrated by the number of assault cases that get reported continuously.

“The National Commissioner has recommended that we appoint interim heads of the maximum center and the remand center, and I have accepted these recommendations.”

“We have a preliminary investigation, which has led to opening a separate case with the South African Police Services. An official has been suspended in relation to this matter. More information will be revealed as and when SAPS finalise their investigations.

Our investigation has also revealed that in some instances that there has been a severe lapse in the classification of inmates at this facility. As a result, all the officials at an advisory level have been given notices of suspension.”