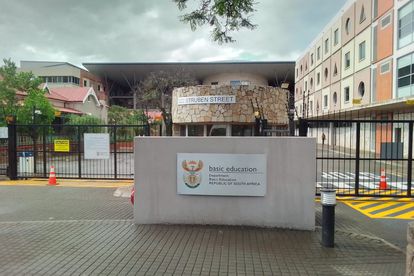 The Department of Basic Education has instructed that disciplinary proceedings will be held against the principal of Phandimfundo Secondary in Gauteng. This comes after 53 matriculants missed one of their exams allegedly due to a protest in the community. Photo: Ezekiel Kenkana

The Department of Basic Education has instructed that disciplinary proceedings will be held against the principal of Phandimfundo Secondary in Gauteng. This comes after 53 matriculants missed one of their exams allegedly due to a protest in the community. Photo: Ezekiel Kenkana

By Ezekiel Kekana on GroundUp

The principal of Phandimfundo Secondary in Etwatwa, Gauteng will face disciplinary proceedings for allegedly advising matriculants to miss one of their final exams due to community protests in the area.

The Department of Basic Education (DBE), in a statement released on Tuesday, accused Rothi Makubela of “misdirecting the province [Gauteng] that there was a protest in the area”. The DBE said that the principal had advised learners to not “appear for the paper”.

Makubela refused to answer any questions by GroundUp related to the allegations.

The incident made national headlines when at least 53 learners did not write their final Economics Paper 1 exam last week.

It is not clear whether the principal’s actions were motivated by the on-going Public Servants Association dispute with government over deadlocked wage increase negotiations. The DBE has since instructed the Gauteng East District to “initiate a disciplinary proceeding” against her. The department said it would “announce the next step to be taken for learners who missed the examinations through no fault of their own”.

The Gauteng Department of Education refused to say whether it will provide support to those learners at Phandimfundo Secondary or if it would discuss the matter with the DBE.

When GroundUp questioned Mhlanga about when that decision will be taken on the Phandimfundo learners, he only mentioned that a “media statement will be issued”.

The department previously stated that matriculants who missed exams will only write in the May/June next year. This was announced by Director-General Mathanzima Mweli in the meeting to address the challenges that continue to disrupt matric examinations across the country.

On Monday, about 1 127 learners in the Nkangala district in Mpumalanga could not write Mathematics and Mathematics Literacy due to community protests, the DBE said. This brings the number of learners who have missed the papers to 1 180 in Mpumalanga and Gauteng. There are about 921 000 learners sitting for their national senior examinations in 6 800 centers across the country.

The DBE has appealed “to members of the community to allow the examinations to proceed. The repercussions for not doing so are devastating to the learners and the communities themselves as it is the children of the same communities that suffer the consequences,” said Mweli.