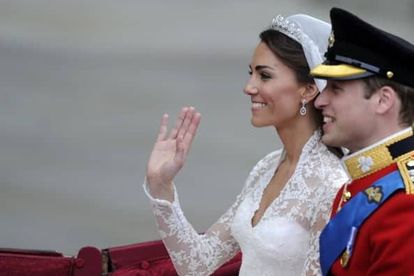 Britain’s Prince William and his wife Kate, Duchess of Cambridge, wave as they travel in the 1902 State Landau carriage along the Processional Route to Buckingham Palace, in London, on April 29, 2011. AFP PHOTO / ODD ANDERSEN (Photo credit should read ODD ANDERSEN/AFP/Getty Images)

Britain’s Prince William and his wife Kate, Duchess of Cambridge, wave as they travel in the 1902 State Landau carriage along the Processional Route to Buckingham Palace, in London, on April 29, 2011. AFP PHOTO / ODD ANDERSEN (Photo credit should read ODD ANDERSEN/AFP/Getty Images)

The Duchess of Cambridge is expecting her third child, after Prince George and Princess Charlotte. The baby will be fifth in line to the British throne.

The 36-year-old was admitted to the private Lindo Wing of St. Mary’s Hospital in central London, where George, four, and two-year-old Charlotte were born.

She was accompanied by William, their Kensington Palace home said in a statement. The hospital is a mile (less than two kilometres) from the palace.

“Her Royal Highness The Duchess of Cambridge was admitted to St. Mary’s Hospital, Paddington, London earlier this morning in the early stages of labour,” the statement said.

“The Duchess travelled by car from Kensington Palace to the Lindo Wing at St. Mary’s Hospital with The Duke of Cambridge.”

Royal fanatics have been camped outside the hospital wing for several days in anticipation.

The baby will be a sixth great-grandchild for Queen Elizabeth II, who turned 92 on Saturday, and her husband Prince Philip.

It will hold the title of prince or princess after Queen Elizabeth changed the rules in 2012 to ensure that all of William’s children would be entitled to the style.

As with their two previous children, the royal couple do not know whether the baby is a boy or a girl.

Bookmakers have Mary, Alice, Victoria, Alexandra and Maria as the favourite girls’ names, with Arthur, Albert, Frederick, James and Philip the most popular boys’ names.

If the baby is a boy, it will no longer overtake Charlotte in the line of succession due to new laws agreed across the 16 Commonwealth realms where Queen Elizabeth is the head of state, including Canada, Australia and Jamaica.

Under the law, designed to end male primogeniture for William’s children, any boys born after October 28, 2011 could not overtake their elder sisters.

William, who is destined to become king after his father Prince Charles, and Kate met at St. Andrews University in Scotland. They married at Westminster Abbey in London on April 29, 2011.

The birth will be announced in both traditional and modern fashion.

A proclamation will be placed on an easel in the grounds of Buckingham Palace for the public to see. At the same time, Kensington Palace will release the news on its Twitter feed.

The birth will be celebrated with a 41-gun salute in London’s Hyde Park — the standard 21 rounds with an extra 20 because it is a royal park.