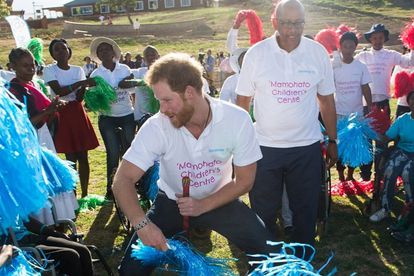 Prince Harry touched down in Lesotho from London yesterday to open the Mamohato Children’s Centre for children with HIV and AIDS.

Harry was given a walking stick and traditional Basotho blanket and began busting a move for the kids.

A wonderful day at the Mamohato Centre yesterday! Tomorrow Prince Harry will play Polo to raise funds for @Sentebale pic.twitter.com/50fDYXSQH9

Prince Harry is dancing somewhere in there….. pic.twitter.com/UV4cgRAwXz

Harry was reunited with 15-year-old orphan, Mutsu Potsane, who he first met in 2004. The two have stayed close over the years and shared a tight hug upon being reunited yesterday.

Prince Harry first met 4-year-old Mutsu Potsane at Mants’ane children’s home for orphans in 2004 (left). The little boy was very vulnerable and needed a lot of care and attention. It was in Lesotho in 2004 that Prince Harry and Prince Seeiso decided to start a charity to provide long term support to the most desperate children in Lesotho – the charity was named Sentebale. Mutsu and Prince Harry have formed a close friendship since their first meeting, and Mutsu writes to the Prince often to let him know how he is getting on with the help of Sentebale. They are pictured here (right) during their last reunion in 2014. #PrinceHarry #Sentebale #LesothosChildren

Mutsu was four the first time he met Harry, who was in Lesotho on a gap year. The two planted a tree together. Harry bought the little boy a pair of blue wellington boots, which Mutsu even wore to bed.

Mutsu is currently part of Harry’s Sentebale’s Scholarship programme and has benefited from the charity’s residential care and financial grants.