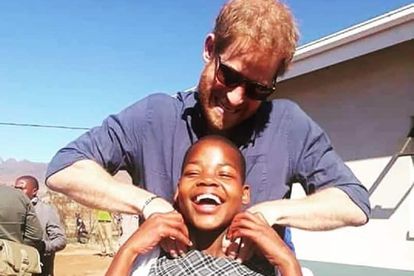 Prince Harry is back in South Africa. Well, technically yes, but also no. The recently married Prince was in Lesotho to celebrate the opening of a new school. Dutchess Meghan remained behind in the UK, though.

Prince Harry in Lesotho: Smiles all around

On numerous previous occasions, Prince Harry has described Africa as his “second home”. While we’re sure he would have loved to be here with his new bride, Harry still managed to bring joy to those around him.

The 33-year-old Prince was back in Lesotho to open a school and a house in Pitseng. The buildings arrive on behalf of the Sentebale charity he co-founded with Prince Seeiso of Lesotho, a friend of Harry’s.

My village. My people. My heart. The village that raised a hustler. To what do we owe the honour of your visit? Nami angazi kodwa siyabonga BABA. Le uena Ntate Harry, Molimo ao hlohonolofatse, ao boloke ebile ao qobe marabeng a satane. So humbled! Words cannot and will not express this insurmountable joy that a brother is feeling. Basotho sechaba sa Thesele, sa Moshoeshoe Molimo o araba thapelo tsa rona. To the #Duke of #Sussex thank you #PrinceHarry

The charity was originally founded in 2006. You know, those days where Harry was still his caring self, just a bit of a party animal.

Prince Harry was truly back here in Mzansi on Thursday, though. The royal flew into Johannesburg just two days after accompanying Meghan Markle on her Royal Ascot debut.

With Queen Elizabeth also attending that event, South Africans have been particularly impressed by Meghan’s ability to make good old Lizzy smile. Smiling, of course, is not exactly something this Queen is known for.

Prince Harry is also set to attend a board meeting of the Africa Parks conservation charity. Harry has done work for the group before and is set to back home by Tuesday. He has the not so small matter of the Queen’s Young Leaders reception to attend.

“The Duke was on a private visit to see the work of Sentebale at a camp for vulnerable children and young people, as well as other projects funded by the charity.”

“During his private working visit to Sentebale in Lesotho, The Duke visited one of Sentebale’s community-led partners for the opening of a new dining hall. This was funded by the charity and will provide a space for children to eat together and have an indoor space to play,” Sentebale said in a statement.

Even though Meghan is not with him this time, the couple spent a romantic safari break together just four weeks after their first date.