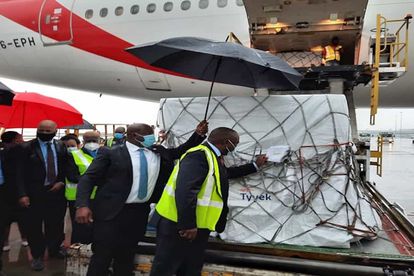 SA plans to donate the million AstraZeneca Covid-19 vaccine shots it received from the Serum Institute of India with other African countries via the AU, the Department of Health’s Deputy Director-General has said.

Pretoria paused the rollout of the AstraZeneca jabs this month after a small-scale study suggested it had limited efficacy against the variant in the country.

It plans to start inoculating health-care workers with Johnson & Johnson’s vaccine as soon as this week in a research study.

“The doses are going to be shared with countries on the continent … via the AU,” Dr. Anban Pillay, told Reuters.

He added that SA would look to recover money spent on the vaccine but was still finalising how to do that.

Health minister Zweli Mkhize, speaking in Parliament, dismissed reports that the AstraZeneca vaccines, which expire in April, will be sent back to India.

“We want to refute categorically the speculations in the media that we have returned the stock [AstraZeneca vaccine] to India. We have not.”

The minister also announced that 20 vaccination centres have been identified across SA’s nine provinces, with plans to vaccinate 80 000 health care workers over the next two weeks.

He said SA has secured a total of nine million doses of Johnson & Johnson’s yet-to-be-approved vaccine, with a first consignment having already landed in the country.

The AU’s disease control body said last week it was not “walking away” from AstraZeneca’s vaccine but would target its use in countries that have not reported cases of the more contagious 501Y.V2 variant first identified in SA late last year.

This as Zimbabwe says the 501Y.V2. variant now makes up more than 60% of cases within its borders, the BBC reports.

It is the first country outside of South Africa to report that the so-called “501.YV2” variant is the dominant strain.

Botswana, Zambia, Ghana and the Gambia have also found some cases.

Harare’s announcement comes a day after a national lockdown was extended by two weeks.

Monday saw the delivery of 200,000 Sinopharm vaccines doses donated by China to Zimbabwe, with rollout set to begin on Thursday.

Little data has been produced so far to prove how well China’s vaccines combat the coronavirus variant which first emerged in South Africa last November.

A small-scale study by Sinopharm researchers found that its efficacy against this variant was weaker than against the original virus, Reuters reported.

Zimbabwe is expected to receive another 600,000 doses in March.

Since the pandemic began, Zimbabwe has recorded more than 35,000 coronavirus cases and 1,410 deaths.