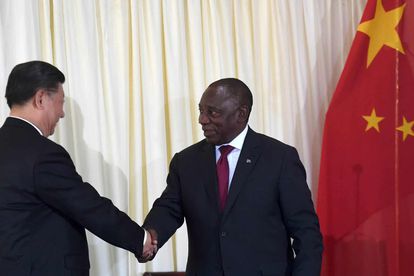 Xi reportedly told Ramaphosa that China will continue to support South Africa through the COVID-19 pandemic within its capacity to do so.

The Chinese leader said that and South Africa remained ‘good brothers’ and hopes to build on the strategic relationship between the two nations.

“China is willing to maintain regular communication with South Africa, advance the comprehensive strategic partnership between the two nations and strengthen cooperation within such frameworks as BRICS and the G20,” Xi said.

Ramaphosa, in turn, said that China is a ‘true friend’ and ‘reliable partner’ of both South Africa and African countries.

The South African president said that his government was prepared to support China on the global political stage, where their interests are aligned.

“South Africa and China share a consensus on many issues and enjoy sound and strong relations.

In Mid-April China donated a large consignment of medical supplies to South Africa, included in the shipment were masks and other Personal Protective Equipment (PPE).

President Xi offered sympathies over the economic difficulties South Africa faces as a result of the COVID-19 outbreak.

Xi says that China firmly supports the United Nations and World Health Organization in fighting the pandemic and is ready to work with all countries in the prevention and control of COVID-19.

The Chinese president urged the international community to step up support for Africa’s fight against the COVID-19 pandemic and actively participate in the initiative endorsed by the G20 nations to suspend debt service payments for the world’s poorest countries.

Ramaphosa risked criticism from human rights groups and western allies by backing China’s stance on Taiwan while encouraging further cooperation with the superpower.

China’s position in the global community

China have been at the centre of the COVID-19 pandemic since the virus was first identified in late 2019. While the WHO have openly praised China and Xi’s government in their response there are many who still call on the country to account for its actions and take responsibility for its role in bringing this global crisis to bear.

This week US President Donald Trump hardened his rhetoric towards China and threatened to break off all relations. China have taken a softer tone urging continued diplomacy and international cooperation.

“To maintain the steady development of China-US relations is in the fundamental interests of the people in both countries, and is conducive to world peace and stability,” said Chinese foreign ministry spokesman Zhao Lijian at a press briefing.

“At present, China and the US should continue to strengthen cooperation against the epidemic, defeat the epidemic as soon as possible, treat patients, and restore economy and production. But it requires the US to meet halfway with China.”