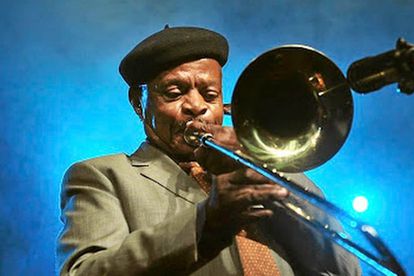 President Cyril Ramaphosa has expressed his deep sadness at the passing away today, Saturday, 23 January 2021, of the cultural icon Jonas Gwangwa at the age of 83.

The Esteemed Member of the Order of Ikhamanga was a globally recognised and awarded composer, arranger, producer and jazz trombonist.

The President’s thoughts and prayers are with Mr Gwangwa’s family, friends, colleagues, comrades and followers around South Africa, the continent and the world.

The citation for his National Order, which he received in 2010, recalls how this South African paragon enthralled audiences around the world with his artistry as a composer and all-around creative genius.

For over 30 years, he was to travel the world as an exile, collecting accolades wherever he went. Ntate Gwangwa narrowly escaped death in 1985 when his home was blown up by the apartheid security forces.

A product of the turbulent but musically significant 1950s, he emerged from the humble environs of Orlando East in Soweto. He delighted audiences in Sophiatown until it became illegal for black people to congregate and South African musicians were jailed merely for practising their craft.

In spite of the restrictions, he established and played with virtually every important band of the era, and such icons as Kippie Moeketsi, Abdullah Ibrahim, Johnny Gertze and Makhaya Ntshoko.

‘A giant of our revolutionary cultural movement‘

President Ramaphosa said: “A giant of our revolutionary cultural movement and our democratic creative industries has been called to rest; the trombone that boomed with boldness and bravery, and equally warmed our hearts with mellow melody has lost its life force.

“Jonas Gwanga ascends to our great orchestra of musical ancestors whose creative genius and dedication to the freedom of all South Africans inspired millions in our country and mobilised the international community against the apartheid system. As we mourn the loss of many precious lives around us, we pray also that the soul of Jonas Gwangwa will rest in peace.”

This article was originally published on www.presidency.gov.za