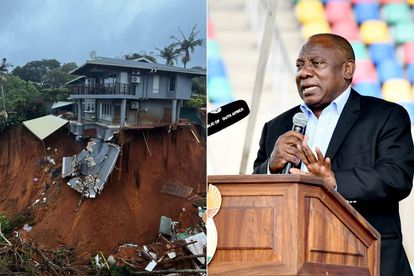 President Cyril Ramaphosa will be making his way through a few flood-affected communities in KZN. Photo: @IanCameron23 / Twitter and GCIS/Flickr

President Cyril Ramaphosa will be making his way through a few flood-affected communities in KZN. Photo: @IanCameron23 / Twitter and GCIS/Flickr

President Cyril Ramaphosa will be visiting flood-stricken parts of KwaZulu-Natal on Wednesday, 13 April. The president intends on offering support to impacted communities. He will also be assessing the response of government and civil society.

Ramaphosa shares thoughts with people impacted by the flooding

A statement released by the presidency revealed that Ramaphosa’s thoughts are with families who had lost loved ones. His thoughts also went out to injured individuals and businesses and organisations who have lost properties.

Ramaphosa spoke about the toll of the force of nature and the response government intends on bringing forth.

“This is a tragic toll of the force of nature and this situation calls for an effective response by government in partnership with communities. This situation calls on us to come together as a nation and offer assistance to those who desperately need our care and support,”

The President will be accompanied by three ministers

Ramaphosa is expected to arrive in the eThekwini Metro on Wednesday morning. He will visit numerous areas that were severely affected by the relentless, heavy downpours of rain in the past week. The flooding and damage have claimed lives, assets and infrastructure.

Ramaphosa’s tour will start at around 10:30. It will begin with a briefing to the President by KZN Premier Sihle Zikalala, Metro Mayor Mxolisi Kaunda and officials on the extent of the flood’s damage. The briefing will also entail the response by government entities.

Which areas will he be visiting?

After the briefing, Ramaphosa will visit the following areas:

Ramaphosa’s tour will conclude at 15:00.

ALSO READ: Dlamini-Zuma – KwaZulu-Natal to be declared a disaster area