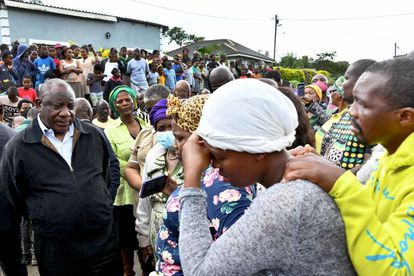 President Cyril Ramaphosa wants all hands on deck as he postponed his Saudi Arabia trip to focus on flood-ravaged KZN. Photo: GCIS / Flickr

President Cyril Ramaphosa wants all hands on deck as he postponed his Saudi Arabia trip to focus on flood-ravaged KZN. Photo: GCIS / Flickr

President Cyril Ramaphosa will not be travelling to Saudi Arabia any time soon. The President has postponed his visit in order to focus on Government’s intervention in KwaZulu-Natal (KZN).

The President was supposed to go to Saudi Arabia on Tuesday. He has since put the trip on hold in order to meet with ministers. Ramaphosa shared that he would be assessing Government’s partnership with communities and civil society organisations in addressing the KZN floods.

Reports state that the province was hit with one of the deadliest storms in the country in decades. Rain continued within KZN over the weekend and the death toll within the province is nearly 400.

Hundreds dead and thousands displaced due to floods

Thousands of residents in KZN have been left without homes and belongings as the flooding and rain swept away their memories. Humanitarian relief has been ongoing, reports EWN. Emergency services have also been on high alert as recovery operations continue.

So far, the death toll is 398 while 27 people have been reported missing. Over 40,000 KZN residents have been left homeless. These numbers are expected to increase as search and rescue efforts continue.

The President has called for all hands on deck. He added that Government is standing by the people of the flood-ravaged KwaZulu-Natal.

Environmental experts have revealed that they are keeping a close eye out for water-borne diseases in KZN. The recent floods in the area have brought about water shortages as well as sanitation challenges.

KwaZulu-Natal’s Department of Cooperative Governance and Traditional Affairs (Cogta) shared that environmental health practitioners are on the ground. Cogta says the practitioners are monitoring numbers in order to identify any water-borne diseases.

Health officials are in fear of diarrhoea outbreaks in KZN. Health MEC Nomagugu Simelane shared that a number of healthcare facilities have been impacted by the torrential rains and subsequent flooding.

Simelane says they are aware of the water availability within the healthcare sector. She went on to speak about the related sanitation challenges.  Read the full story here.