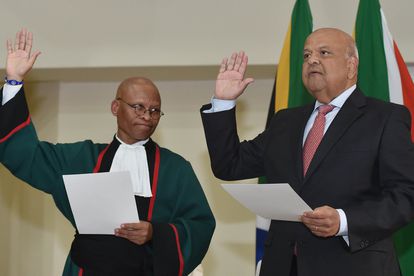 Public Enterprises Minister Pravin Gordhan is clearing the air after Chief Justice Mogoeng Mogoeng that he had approached him to ask how “his close friend” judge Dhaya Pillay had fared after she had completing an interview for a vacancy on the Supreme Court of Appeal in 2016. Pillay failed to make the cut, in her bid for the post.

Mogoeng spoke briefly about his encounter with Gordhan on Tuesday, 13 April 2021, during the Judicial Service Commission’s (JSC) interview with Pillay, who’s vying for one of the two openings in the Constitutional Court.

Mogoeng and Gordhan’s encounter raised questions as to whether the minister was using his accessibility to the CJ and power, to influence Pillay’s appointment, something the Economic Freedom Fighters (EFF) are not too pleased with.

In a letter to the JSC, Pravin Gordhan confirmed he did in fact meet with Mogoeng Mogoeng but said the aim was never to discuss his friend.

“I did not meet the Chief Justice in April 2016 to discuss Judge Pillay. The enquiry about Judge Pillay was purely incidental to the purpose of the meeting,” said Gordhan.

“I want to state emphatically that I would never, and nor did I in any way, seek to influence the Chief Justice or the JSC in the appointment of judges, whose independence I have always respected”

Further clarifying why he wanted to meet with Mogoeng, Gordhan, who was Finance Minister at the time, said he had wanted to renew tax ombud Judge Ngoepe’s appointment in October 2016.

“It was my intention to renew his contract for a further three years, commencing October 2016 and I conveyed this intention to the Chief Justice,” he said.

During Pillay’s interview with the JSC, Mogoeng asked her about her so-called friendship with Gordhan, which had been raised by EFF leader Julius Malema.

He said he had little recollection of the purpose of the meeting, but remembered Gordhan asking about Pillay’s interview.

“Why did the minister make an effort to meet me? We are not friends. I don’t know him from anywhere except from television. Why did he make a trip to seek an audience with me to ask me how did ‘my friend’ perform?,” Mogoeng said.