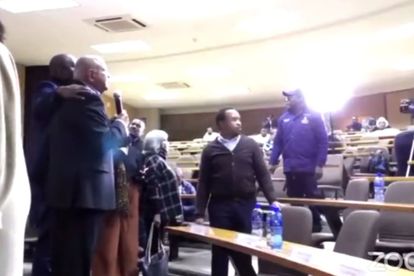 A lecture by Public Enterprises Minister Pravin Gordhan descended into chaos on Thursday evening, 7 July 2022, after Wits University students confronted him about the state of governance in the country.

Gordhan was delivering a lecture at the Wits School of Governance on the reforming of state-owned entities.

The timing of the lecture couldn’t have been more off – Eskom, which Gordhan essentially presides over, has failed to fulfill its core mandate (eg. the implementation of load shedding). In addition, other entities under the Public Enterprises Ministry are also in a state of disarray (let’s not forget South African Airways collapsed and had to be sold for a mere R51).

It wasn’t too long into Pravin Gordhan’s address when attendees of the lecture at Wits bombarded him with questions, including about Eskom and its failures and other SOEs.

When Gordhan couldn’t answer some of their questions, the crowd began chanting for him to resign from Cabinet.

A Master’s student at Wits also confronted Gordhan about state capture, asking him why he refuses to accept any accountability. Gordhan was, after all, in former president Jacob Zuma’s cabinet during those years.

Gordhan isn’t the only minister to be grilled about their competency (or lack thereof) in a public forum. Earlier this week, his police counterpart, Bheki Cele, was confronted by Ian Cameron from Action Society for failing to adequately address crime in communities.

Cele didn’t take too kindly to the criticism, which resulted in an outburst on his end.

“And I’m not going to take any nonsense of somebody who regards me as a garden boy today because you regard me as a garden boy. You come here… Shut up! Shut up! I sat here, I listened to you talking nonsense. Listen! It’s your time to listen! Sit down and listen young man, or get out,” Cele told Cameron.