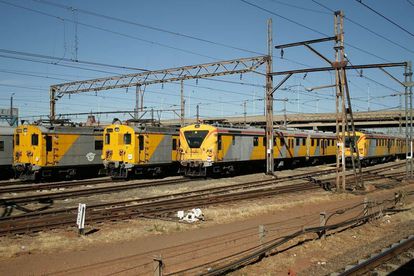 Trains stand side by side on the train tracks. Image via: Wikimedia Commons

Trains stand side by side on the train tracks. Image via: Wikimedia Commons

Look, it’s no secret that the state of the South African railway network is beyond horrible. While it hasn’t been good for years, the last year and a half during the pandemic have gutted the network even more. The situation is dire in all provinces. But thanks to a new Parliamentary reply from Transport Minister Fikile Mbalula, we now know that less than a quarter of PRASA’s Gauteng service is working.

In a written response to a question from an EFF MP, Mbalula revealed that just 17% of Prasa’s Gauteng railway network is functional. The four lines functioning in the province are Vereeniging and Saulsville and Naledi and Leralla.

The situation in the other provinces makes for equally as frightening reading. In KwaZulu-Natal only 47% of the network is functional. This includes the province’s most in-demand line, Umlazi to Durban.

Last month, Mbalula described Prasa as being in a “mess”. He also revealed that 5 000 more security guards were being brought in to protect railway network infrastructure.

While millions of rand worth of equipment and infrastructure have been stolen in the last 2 years, the rail agency has also had 10 CEOs in the last 6 years.

Prasa says it is making some progress though. The return of its long-distance passenger train is now underway. A small number of trips from Johannesburg to Bloemfontein and even Johannesburg to Limpopo will launch before the end of the month.